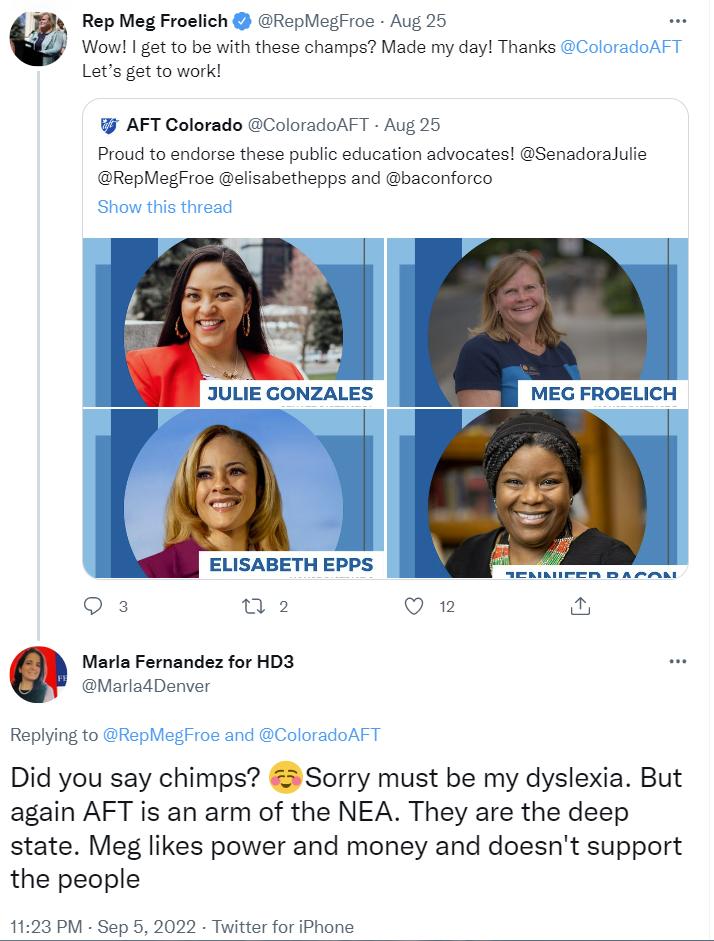 As Hannah Metzger of the Colorado Springs Gazette’s political blog reports, while some candidates running as placeholders in districts they cannot mathematically win run a clean campaign intended primarily not to cause collateral damage elsewhere, some others just don’t give a crap–and serve as reminders that if a candidate isn’t fit to run in a competitive race, they’re nothing but a liability to their party as placeholders:

A Republican candidate for the Colorado House came under fire and accusations of racism after calling Black and Latina Democratic candidates “chimps” in a tweet on Monday.

The interaction began with the Colorado branch of the American Federation of Teachers tweeting its endorsement for Democrat Rep. Meg Froelich in the House District 3 race, along with three other candidates, two of whom are Black and one who is Latina. Froelich reposted the tweet calling her fellow candidates “champs.”

“Did you say chimps?” responded Marla Fernandez, the GOP nominee for House District 3. [Pols emphasis] “Sorry must be my dyslexia.”

HD-3 candidate GOP Marla Fernandez has spent the last 24 hours insisting to all comers that she’s not racist for referring to a group that included two African American lawmakers as “chimps,” and that the incident went just the way Fernandez wanted, claiming she “needed media attention.” But running in what everyone knows is an unwinnable race also means that when you get in trouble, no one finds it necessary to defend you:

In a statement to Colorado Politics, Colorado GOP Chairwoman Kristi Burton Brown rebuked Fernandez’s tweet, saying it was “uncalled for, highly inappropriate, and that she should apologize immediately.”

Defending the indefensible is nothing new for Colorado GOP chair Kristi Burton Brown, but the universal principle of risk vs. benefit always applies. There’s nothing to be gained from defending Fernandez since she can’t win her race, and that makes Fernandez far more vulnerable to being disowned by a Republican Party desperate to prove it isn’t comprised solely of people like…well, Marla Fernandez. If Fernandez had a hope in hell, the long odds of recapturing a House majority would obligate Republicans to try to defend her.

And of course, Fernandez has her supporters too! They’ll still be there after she loses in November.