State Sen. Dennis Hisey is in All Sorts of Residency Trouble 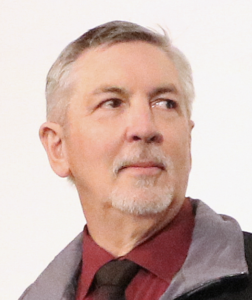 State Sen. Dennis Hisey ponders which of his many keys will open his front door.

Republican State Sen. Dennis Hisey is all over the place…literally. And it looks like he may have broken the law as a result.

As Marianne Goodland reports for the Colorado Springs Gazette, Hisey appears to have been playing musical residences in an effort to maintain his eligibility to remain a candidate for Senate District 11 after he was drawn out of his former district in SD-2:

Sen. Dennis Hisey, R-Colorado Springs, has been accused of voting in a district in which he does not live. [Pols emphasis]

CEI alleges Hisey — who is running for his second term in November against Democratic Rep. Tony Exum — lives in Fountain, which in 2018 was in Senate District 2, the seat Hisey was elected to that year.

“I am living in Senate District 11,” he said. “They’re trying to make political hay out of this. They do what they think they need to do to win, but we’ll surprise them.”

The real surprise, perhaps, is that Hisey apparently did something very similar to what got Democratic Sen. Pete Lee indicted earlier this month by District Attorney Michael Allen: Registering to vote at an address where he doesn’t live. Lee represents a Senate District in northwestern Colorado Springs; as Goodland points out in her story for the Gazette, the similarities between Lee’s alleged crime and what Hisey is accused of doing will make it difficult for Allen to NOT scrutinize Hisey’s actions.

Hisey is currently running in SD-11 against Democrat Tony Exum rather than remaining in his former district because the Independent Redistricting Committee drew Hisey’s Fountain residence into the same district as incumbent Republican State Sen. Bob Gardner. Knowing he would need to change his address in order to run for the new seat in SD-11, Hisey changed his voter registration in October 2021 to an address on Winter Sun Drive in Colorado Springs, about 10 minutes to the north of his longtime Fountain residence on Circle C Road.

According to The Colorado Springs Independent, the “Winter Sun” address is a home that is owned by Hisey’s stepson, Thomas Luckett. Hisey was registered to vote at this address when he cast a ballot in the June 28th Primary, which is where his legal problems come into play. An investigation by the Colorado Ethics Institute seems to show that Hisey actually still lives on Circle C Road in Fountain, which is where his wife, Kathy Hisey, is registered to vote (according to Dennis Hisey, his wife is a full-time resident at their Fountain address). 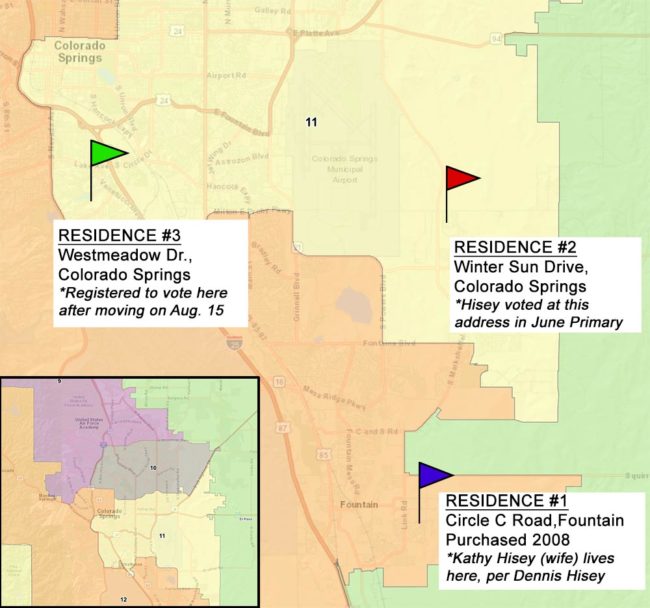 The many residences of Dennis Hisey

Hisey had more to say to Helen Lewis of The Colorado Springs Independent. Most of those comments did not help his cause:

“So I basically had two residences, which is not uncommon, many people do, but you’re only allowed to have one legal residence. So it was Winter Sun Drive,” Hisey tells the Indy. “And yes, I did cast the primary ballot there.”

Hisey didn’t want to comment on how he secured “a room” at the Winter Sun Drive property or how (or if) Thomas Luckett is related to him.

“You know, I’m not sure that’s relevant to the story,” he says. “Yeah, I just don’t see where that’s a relevant piece to this story.” Asked whether he had a rental agreement or a family-type agreement to stay at Luckett’s Winter Sun Drive residence, Hisey sighed and said, “A combination of both.” [Pols emphasis]

A longtime Fountain resident tells the Indy that Luckett, who in 2012 served as an intern at the Pikes Peak Regional Building Department while Hisey was vice chairman there, is Hisey’s stepson.

Pro Tip: It’s never a good idea to tell a reporter what is or is not relevant to the story they are pursuing about you.

Hisey then told the Independent that he has since moved to a THIRD residence, an apartment near the Broadmoor World Arena on Westmeadow Drive:

Hisey says he moved out of Winter Sun Drive a couple of weeks ago. “I was officing out of the Circle C [Road residence in Fountain] so it wasn’t uncommon for me to be there during the day, because that’s where the computer and the printer and all that good stuff was,” he says. “But it became apparent that I needed to have more than my fingertips, so I moved to an apartment where I’ve got campaign headquarters set up.” Hisey adds that this apartment, in SD11, is now his primary residence. “It’s where I’m staying and sleeping,” he says.

However, Kathy Hisey is staying in Fountain at the couple’s Circle C Road house, despite her husband’s new residence. “Yes, that is still the case,” Hisey says. “My wife has not given up her primary residence.” [Pols emphasis]

To recap, Hisey claims that he only “offices” at his Fountain address — where his wife lives — but claims that he really lives now at an apartment in central Colorado Springs. It’s probably not just a weird coincidence that Hisey moved to the Westmeadow Drive apartment about a week after Pete Lee was indicted for voting at an address that was not his primary residence.

“Public records and the attached investigative memo provide what seems to be ample evidence that Mr. Hisey resides in SD11 in name only.”

As The Colorado Sun notes, Hisey might have a difficult time making a convincing legal argument that he has, in fact, been a resident of SD-11 long enough to be a legitimate candidate:

State law defines a person’s residence as “the principal or primary home or place of abode … in which a person’s habitation is fixed and to which that person, whenever absent, has the present intuition of returning after a departure or absence, regardless of the duration of the absence.”

In determining what is the principal or primary place of abode of a person, the following circumstances relating to the person shall be taken into account: Business pursuits, employment, income sources, residence for income or other tax purposes, age, marital status, residence of parents, spouse or civil union partner, and children, if any, leaseholds, situs of personal and real property, existence of any other residences and the amount of time spent at each residence, and motor vehicle registration.

Hisey has already acknowledged that his wife lives in Fountain, which is not in SD-11, and that could be a significant issue down the road. As the investigation by the Colorado Ethics Institute shows, the best way to find Hisey at any given moment is to go to the home where is he not supposed to be living.

Hisey has had trouble with obeying candidacy rules in the past, as the Independent notes:

This is also not Hisey’s first brush with strife in public office. Formerly an El Paso County commissioner, Hisey was at the center of controversy over what some claimed was a deceptively-worded ballot question that allowed him to keep his seat for a startling 12 years.

Hisey’s latest residence issue could prove important to Republicans as they try to take majority control of the State Senate in November. Following State Sen. Kevin Priola’s recent defection to the Democratic Party, Republicans need to capture four seats from Democrats in order to control the Senate — and they probably have no chance of doing so without winning in SD-11.