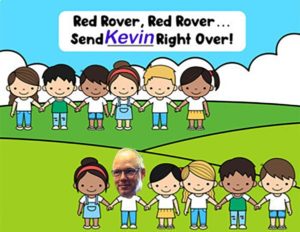 Colorado politicos are still buzzing about State Sen. Kevin Priola’s big announcement on Monday that he was leaving the Republican Party and becoming a Democrat because of his disgust over the GOP’s refusal to address the issue of Climate Change and their continued embrace of the “Big Lie” propagated by former President Trump.

In today’s “Unaffiliated” newsletter, Jesse Paul of The Colorado Sun provides more detail on how Priola came to his decision on leaving the GOP:

Priola says his decision to leave the Republican Party and become a Democrat didn’t happen overnight. In fact, it was years in the making.

“I almost didn’t run in 2020,” the Henderson lawmaker said. “And it’s one of the reasons I didn’t run in the 8th Congressional District.”

But it wasn’t until the last four to six weeks that Priola said he began having conversations in earnest with Senate President Steve Fenberg, a Boulder Democrat, about switching his party affiliation.

“I made my final decision before the FBI raid (of former President Donald Trump’s Florida home Aug. 8),” Priola said. “The Republican Party I thought I was a member of — or that I signed up for 30 years ago — would have never gone along with this crazy drama and shady stuff Trump’s been pulling.” [Pols emphasis]

As we wrote yesterday, Priola’s decision to leave the Republican Party makes plenty of sense when you consider just how often the GOP has shat on him over the years. If Priola had any last-minute doubts about his move, the response from his former Party has done nothing but validate his decision. 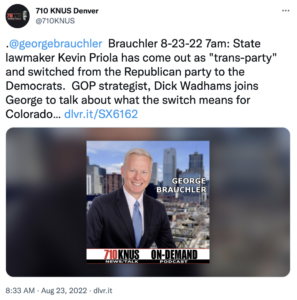 Senate Minority Leader John Cooke of Greeley dismissed Priola’s complaints about the party’s response to both the Jan. 6 insurrection and climate change…

…Cooke said while he doesn’t deny climate change is real and that humans may have a “little bit” of an effect, “we’ve had climate change ever since the earth was formed. … I don’t think his excuse holds any water.” 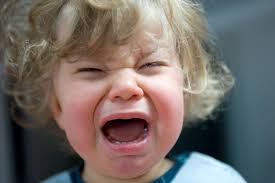 Meanwhile, State Rep. Colin Larson (R-Littleton) says that Priola has been disinvited from his birthday party and can no longer play in his treehouse:

Larson…who said he has defended Priola in the past and considered him a friend until “three hours ago” did not mince words when discussing the change.

“He’s going to be single-handedly responsible for the partisanship and divisiveness that’s to come if the Senate remains in Democratic hands,” Larson said.

That last statement is just plain silly, as is the rest of Larson’s easily-disputed narrative:

He said he would have understood Priola’s decision more — though still not agreed with it — if the election deniers had won nominations for the Colorado secretary of state and U.S. Senate seats. Instead, the move may prove vital to Democrats keeping full control of state government as more moderate Republicans look ascendant in the party. [Pols emphasis]

Since Larson seems to be confused about timelines, we’ll just leave this here:

We’ll conclude here the same way we finished our commentary on Monday: If you spend enough time telling someone how much you dislike them, eventually they are going to listen.