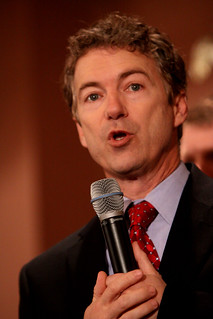 That’s so GAY!” giggled Rand Paul in several places during a special showing of The Avengers. After each reiteration, Paul turned to his viewing companions, elbowed their ribs, and gazed expectantly at them, awaiting the flurry of appreciative chuckles he was sure were deserved by his wit. Favorite targets included Captain America and the Incredible Hulk, both of whom are believed to be heterosexual. Paul was also observed nodding rapidly and repeating, “Am I right, or am I right?”

…OK, not really, but Paul did bring political discourse down to a seventh-grade level at Iowa’s Faith and Freedom Coalition Meeting when he said, “The president recently weighed in on marriage and you know he said his views were evolving on marriage. Call me cynical, but I wasn’t sure his views on marriage could get any gayer.”

Paul followed up this high point of his oratorical career by complaining, “He said the biblical Golden Rule caused him to be for gay marriage. I’m like, ‘What version of the Bible is he reading?'”

Thanks to bible.cc, here are some possible answers to Paul’s question.


“So whatever you wish that others would do to you, do also to them, for this is the Law and the Prophets.”

Therefore all things whatsoever ye would that men should do to you, do ye even so to them: for this is the law and the prophets.

All things therefore whatsoever ye would that men should do unto you, even so do ye also unto them: for this is the law and the prophets.


The general meaning of it is this: ‘Guided by justice and mercy, do unto all men as you would have them to do to you, were your circumstances and theirs reversed.’

If anyone was still wondering what’s really behind the Ron Paul “reLOVEution,” look no farther than the juvenile and repulsive behavior of Paul’s most politically successful son, while campaigning for his father’s unlikely presidential bid. In a household that teaches true civil libertarianism, one could expect to find, if not gay marriage proponents, opponents of governmental regulation of marriage in any way, shape, or form. Rand Paul, on the other hand, appears to have been raised to value Christian dominionism–and a brand of it that would embarrass Jesus, Matthew, and most Christians, at that–over liberty.