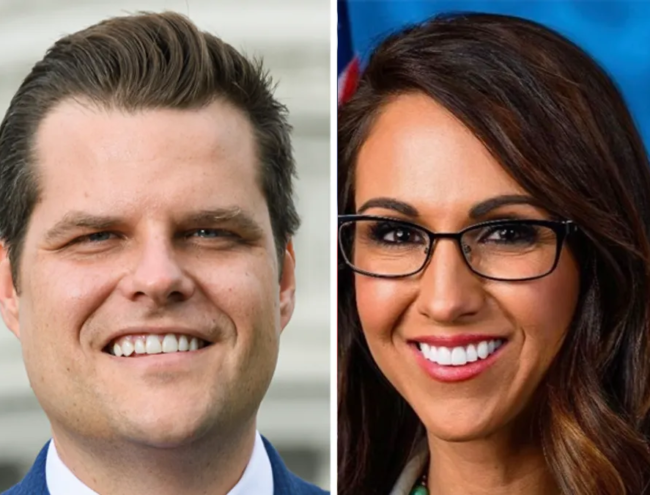 The Hill reports on legislation reauthorizing federal enforcement efforts against human trafficking that passed the U.S. House yesterday by a lopsided 401-20 vote, with the teensy minority against nonetheless including two Republican members from Colorado:

The legislation, titled the Frederick Douglass Trafficking Victims Prevention and Protection Reauthorization Act, passed in a 401-20 vote, with all opposition coming from Republicans. Eight Republicans and one Democrat did not vote.

Gaetz, who is currently under investigation by the Department of Justice for sex trafficking allegations involving a minor, was among the Republicans who opposed the bill that aims to bolster programs including shelters, mental health care, education and job training for victims of human trafficking.

Plenty of fringe right usual suspects on this list, and as readers know Rep. Lauren Boebert takes pride in being the lone or extreme minority vote against what seems like perfectly sensible and even uncontroversial policy, like stopping scams against senior citizens. It’s somewhat less common for Rep. Ken Buck to join Boebert and the “Qaucus” in these outlier votes, so everyone is naturally curious:

Buck, who often explains his nay votes on Twitter, has not mentioned the human trafficking bill. His last tweet trolled VP Harris for saying the word “woman.” https://t.co/1mOvtqAa4K

Rep. Matt Gaetz, whose vote against the Frederick Douglass Trafficking Victims Prevention and Protection Reauthorization Act was seized upon due to Gaetz being personally under investigation for the crime of sex trafficking (of humans) across state lines, doesn’t have much sense of shame when it comes to casting votes that raise glaringly obvious questions about his sordid personal life. But we would genuinely like to know what former prosecutor Buck, who despite his predilection for spouting off like a crazy old uncle exhibits occasional flashes of conscience, was thinking when he decided to vote with Matt Gaetz against this particular piece of legislation.

There are merely bad votes, and there are votes that stink to high heaven. Here we have the latter.