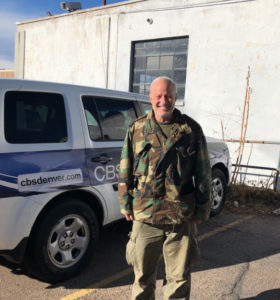 Aurora Mayor Mike Coffman is up in arms about homeless people coming to Aurora from Douglas County, despite saying last year that he hoped Aurora’s camping ban would result in Aurora’s unhoused population migrating from Aurora to “another community.”

“No jurisdiction should export their homeless to another jurisdiction without that jurisdiction consenting to that,” Coffman told KOA Morning News host Marty Lenz this morning, referring to a proposal to reintegrate homeless prisoners with family and in facilities in Aurora so that they don’t simply end up in Douglas County jail again.

“I just hope that Douglas County rises up to the occasion to take care of that population that’s in their community,” Coffman said. “And I believe that they will.”

Yet, Coffman has said he hopes Aurora’s camping ban will coerce unhoused people to exit Aurora. Under the Aurora ban, officials will forcibly remove people from encampments and offer shelter options elsewhere in the city. But Coffman and others do not think most displaced people will use the shelter option.

Last May, in a discussion of Aurora’s camping-ban proposal, Coffman told KHOW’s Dan Caplis that he hoped homeless people in Aurora’s encampments are “going to discover” that “Aurora, Colorado, is not the best place for them to be.”

“They will find –,” Coffman told Caplis, before breaking into a laugh and restarting his sentence, “they will find another community that will greet them with open arms and says, ‘Hey, listen, we’ll provide all these services, and we’ll require nothing of you. And you can, you know, live off the taxpayers.’”

Asked today by KOA’s Lenz if he thought Aurora’s camping ban might force homeless people to “shift to other counties,” Coffman replied with another laugh, “It seems that they move around in Aurora.”

Coffman has said the same thing before, yet he flat-out dismisses experts and various studies which advocate for a housing-first approach to effectively and efficiently address community challenges presented by homlessness.

“The challenge with the homeless people in encampments is, not that many of them have taken us up on our shelter option that we provide for them. And they just tend to move from one location to another, whether that’s outside of Aurora or inside of Aurora.

“So far it appears that they are moving inside of Aurora.”