Get More Smarter on Tuesday (July 5)

We’ll get you caught up after a long holiday weekend. Let’s Get More Smarter. If you think we missed something important, please include the link in the comments below (here’s a good example). If you are more of an audio learner, check out The Get More Smarter Podcast. And don’t forget to find us on Facebook and Twitter.

► Police continue to investigate a deadly shooting in a wealthy suburb of Chicago on the Fourth of July. As The Associated Press reports:

The gunman who targeted an Independence Day parade in suburban Chicago fired more than 70 rounds and evaded initial capture by blending into the fleeing crowd, police said Tuesday.

The assailant’s shots were initially mistaken for fireworks before hundreds of panicked revelers fled in terror in Highland Park, a close-knit community on the shores of Lake Michigan that has long drawn the rich and sometimes famous…

..Authorities detained a suspect Monday evening in a traffic stop that led to a brief chase. Police initially described the man as a person of interest, but a spokesman for the Lake County Major Crime Task Force said Tuesday that he is now considered a suspect.

Charges were expected to be announced soon, according to a spokeswoman for the Lake County state’s attorney, Sara Avalos. Authorities offered no motive for the attack.

The shooting in Highland Park marked the 311th mass shooting in the United States in 2022.

Alan Gionet of CBS Colorado looks at how mass shootings are changing the way we live our lives in Colorado:

“I do sometimes think you know, I’m not sure if I want to go to that public event,” said Beverly Kingston, a PhD in sociology and director of the Center for the Study and Prevention of Violence at CU Boulder.

Kingston studies violence and ways to prevent them and absorbs the stress of that. But that stress is reaching many of us.

“I think we’re all trying to deal and process with the level of violence that we’re experiencing in the nation,” Kingston added…

…Raymond James noted how he didn’t want to take his family into the area around Civic Center Park and felt more comfortable around the lake, where he might be able to see someone like a shooter coming from a greater distance.

Democratic political consultant Ian Silverii doesn’t think this portends much for November, mostly because Democrats didn’t have many contested races in the Primary Election:

“There’s no evidence at all that primary votes with an uncontested Democratic ballot and an almost completely contested Republican ballot will have any bearing on the general election whatsoever,” he said.

The number of unaffiliated ballots cast for Republicans is expected to rise as more ballots are processed in the coming days. There were about 40,000 unaffiliated ballots across the state that still had to be tabulated as of Friday morning, according to the Colorado Secretary of State’s Office.

Meanwhile, it looks like 2022 may be the year with the lowest number of Democratic primary ballots cast by unaffiliated voters.

► As The Washington Post reports, Republicans around the country are defying President Biden and using COVID relief money for tax cuts:

As gas prices climbed toward record highs this May, Florida Gov. Ron DeSantis (R) secured a pause on the state’s fuel taxes — a $200 million plan he helped pay for with a pot of federal funds awarded earlier in the pandemic.

The policy was intended to save money for local drivers and state coffers alike. But it also appeared to mark a potential violation of federal law — and the latest skirmish in an escalating clash between GOP officials and the White House over how states can use generous federal stimulus dollars.

More than a year after Congress approved a $1.9 trillion coronavirus relief package, Republicans in nearly two dozen states have ratcheted up efforts to tap some of those funds for an unrelated purpose: paying for tax cuts. The moves have threatened to siphon off aid that might otherwise help states fight the pandemic, shore up their local economies or prepare for a potential recession.

► As The New York Times reports, there are new concerns that recent Supreme Court rulings on abortion could drastically restrict the availability of in-vitro fertilization for couples having trouble conceiving a child.

► As CBS Colorado reports, emotions are still running high over the recent repeal of Roe v. Wade. In a related story, 9News looks at organizations that are helping women in need of an abortion make their way to Colorado, where the procedure is legal and protected.

► Why would you want John Eastman’s advice on ANYTHING right now? As Colorado Newsline reports:

He communicated with group members as recently as this week about the Colorado primary election Tuesday.

Eastman’s association with USEIP was indicated by a copy of an exchange that was obtained by Newsline. USEIP spokesperson Holly Kasun confirmed Eastman’s presence in the group.

► Fox 31 Denver speaks with a former spokesperson for the militia group called the “Oath Keepers.” Later this month, Jason Van Tatenhove will speak to the Congressional committee investigating the Jan. 6 insurrection.

► The Colorado Sun catches up with the “Fruita Man,” Gerald Wood:

Gerald Wood thought it was odd when after meeting with Mesa County Clerk Tina Peters he was told to hand over the county ID badge he had just been issued to be a contractor for her office.

It was May 2021 and Wood, a private sector software engineer who goes by “Jerry,” had recently been asked by Peters to go through a background check so that he could do occasional information technology work…

…Given his professional background, which includes work in data security, Wood thought it was “weird” that Peters’ office wanted to keep the ID. That wasn’t a best practice, he thought, planning to make sure Peters knew that he needed a badge if he was ever asked to do a security analysis for her.

Wood, 56, never got another chance to use that badge. Nor did he ever do any work for the Mesa County Clerk’s Office. “I’ve never even seen the election equipment,” he said.

It wasn’t until authorities searched Wood’s Mesa County home in August 2021 that he started to find out what happened to his access badge and how he was at the center of a controversy soon to be the focus of national headlines. Investigators say Peters let another man assume Wood’s identity to attend a sensitive election system software update completed by Denver-based Dominion Voting Systems and the Colorado Secretary of State’s Office, which called the incident a security breach.

► Senator Michael Bennet is already out on the stump campaigning for re-election now that he knows his General Election opponent will be Republican businessman Joe O’Dea.

► Even though she no longer has to worry about a Republican Primary, GOP gubernatorial nominee Heidi Ganahl STILL won’t provide a straightforward answer as to whether or not she believes that the 2020 election was legitimate.

As we wrote in this space last week, perhaps the real answer to Ganahl’s obfuscation has been right in front of us all along: Ganahl might actually believe that the 2020 election was a fraud.

► Colorado Newsline looks at whether Republicans can find a way to flip control of the State Senate in 2022.

► The U.S. Supreme Court may soon issue a ruling that could dramatically remake elections in this country. From The Washington Post:

The idea, known as the “independent legislature theory,” represents to some theorists a literal reading of the Constitution.

But in its most far-reaching interpretation, it could cut governors and state courts out of the decision-making process on election laws while giving state lawmakers free rein to change rules to favor their own party. The impact could extend to presidential elections in 2024 and beyond, experts say, making it easier for a legislature to disregard the will of its state’s citizens.

This immense power would go to legislative bodies that are themselves undemocratic, many advocates say, because they have been gerrymandered to create partisan districts, virtually ensuring the party-in-power’s candidates cannot be beaten. Republicans control both legislative chambers in 30 states and have been at the forefront of pushing the theory.

► Denver7 runs down new laws that took effect in Colorado as of July 1.

Several Colorado cities are suing the state over a new law that would keep them from collecting sales and use tax on building materials for public schools.

HB22-1024 passed the legislature this year with bipartisan support in both chambers. Gov. Jared Polis signed it into law in April and it is slated to go into effect in August. In short, lawmakers said they wanted to keep taxpayers from paying extra on school buildings…

…But the municipalities — Denver, Boulder, Commerce City, Pueblo and Westminster — are arguing the law is an unconstitutional usurpation of their right to levy taxes.

► Colorado Public Radio looks at one expert’s proposal for restricting water use from the Colorado River.

► Georgia Gov. Brian Kemp is struggling to keep up on the fundraising front with Democratic challenger Stacey Abrams.

► May this oft-used headline from The Onion someday prove to be wrong: 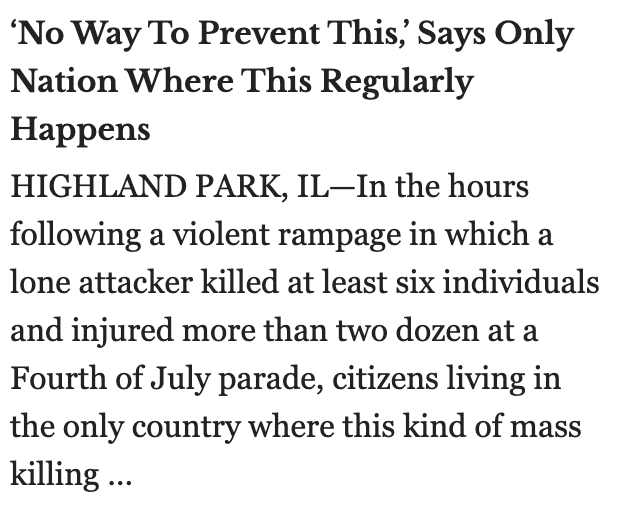 ► As Dave Perry writes for The Aurora Sentinel, Aurora Mayor Mike Coffman has a big problem on his hands related to international travel junkets undertaken by city council members at city expense.

► Elizabeth Epps won a hotly-contested Primary in HD-6, while Wanda James emerged victorious in a tight battle for CU Regent from CO-01.

► Always read Colorado Pols. Everyone else does.

► Check out the latest episode of the Get More Smarter Podcast, featuring an interview with Seth Masket of the Center for American Politics at the University of Denver. Hosts Jason Bane and Ian Silverii also explain how and why they were so wrong about last week’s Primary Election: