Republicans are waiting to find out who will be their nominee in CO-07, as Tim “Demon Guy” Reichert, Erik Aadland, and Laurel Imer finish out a long Primary campaign tonight.

In the meantime, the National Republican Congressional Committee (NRCC) is sending out nonsense statements to media outlets alleging that Democrat Brittany Pettersen is fully aware that she will need to run a political campaign until the General Election on November 8.

We get a lot of press releases here at Colorado Pols. Some of them are less effective than others.

This one is dumber than most: 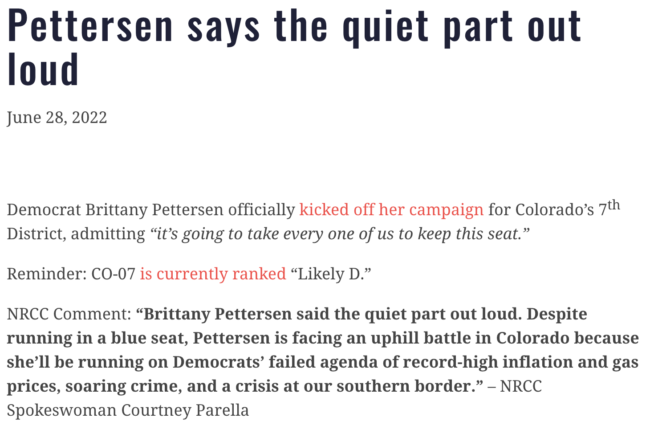 What, exactly, is the point of reminding reporters that CO-07 is considered a “Likely D” seat? Hey, just wanted to let you know that we probably won’t win this seat no matter who gets nominated tonight!

And what is the “quiet part” that Pettersen said “out loud”? That she is encouraging supporters to get involved in her race?

This is just another reminder that if you don’t have anything to say…then just don’t say anything.