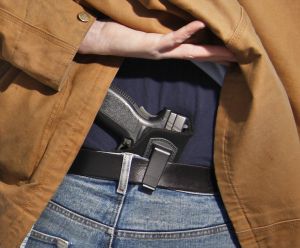 CNN reports while the nation comes to grips with a major decision by the new 6-3 conservative U.S. Supreme Court that could drastically alter the debate over gun control policy in the United States for generations:

The Supreme Court on Thursday struck down a New York gun law enacted more than a century ago that places restrictions on carrying a concealed gun outside the home.

“Because the State of New York issues public-carry licenses only when an applicant demonstrates a special need for self-defense, we conclude that the State’s licensing regime violates the Constitution,” Justice Clarence Thomas wrote for the court’s 6-3 majority.

“Our holding decides nothing about who may lawfully possess a firearm or the requirements that must be met to buy a gun. Nor does it decide anything about the kinds of weapons that people may possess,” Alito wrote.

Despite this caveat, the decision is being widely interpreted as a sweeping invalidation of all kinds of gun laws–though the full extent will itself have to be litigated:

The US Supreme Court’s ruling on Thursday to strike down a New York gun law that places restrictions on carrying a concealed gun outside the home “expands the Second Amendment right,” CNN chief legal analyst Jeffrey Toobin said.

“What we don’t know is if it completely eliminates the possibility for any sort of gun regulation,” he said. “It is possible that red flag laws may still be intact after this.” [Pols emphasis]

We’re watching for local analysis of this decision and how it may impact Colorado’s gun safety laws.