PROTECT DEMOCRACY: Shut Down The University of Colorado’s Benson Center 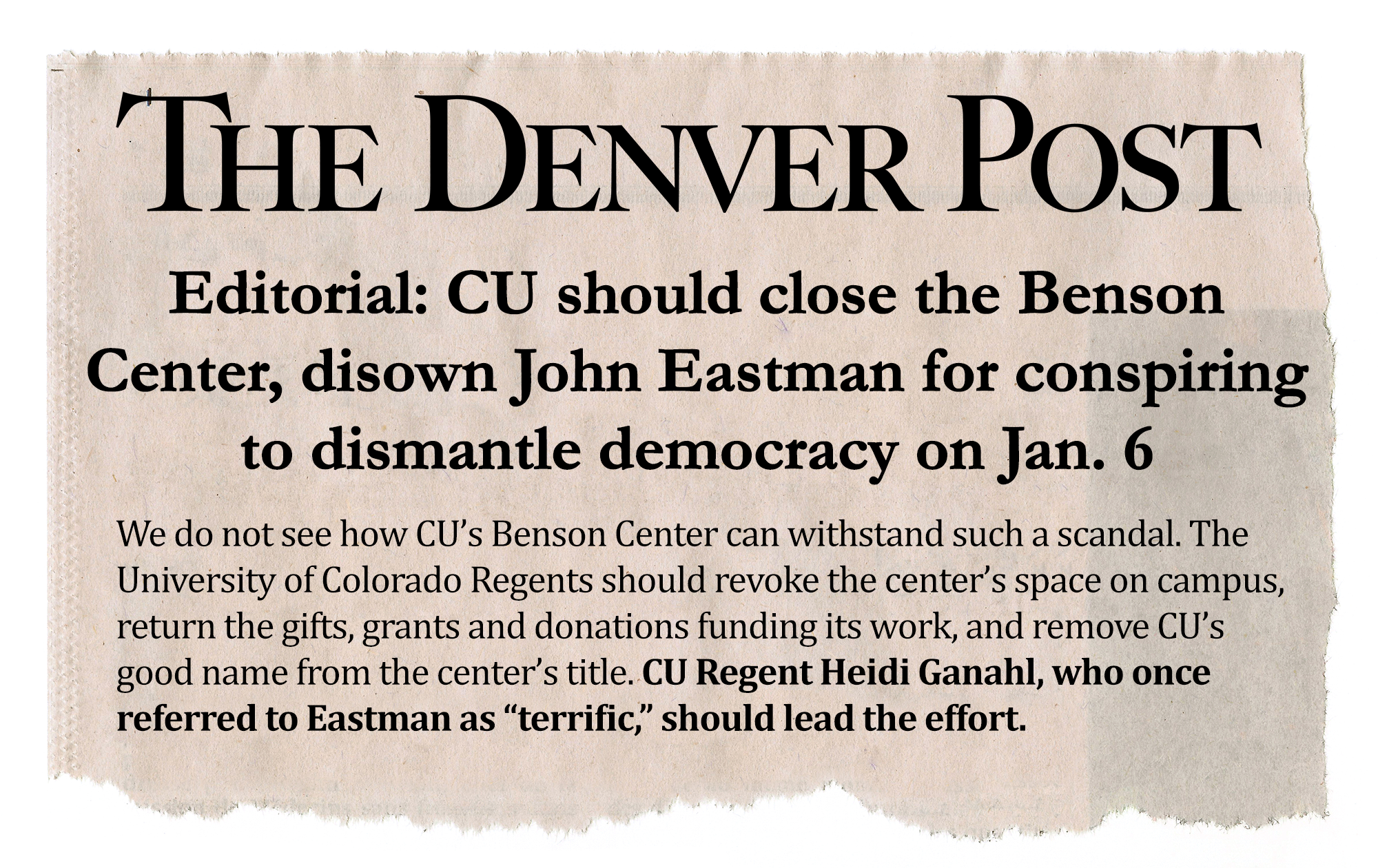 Last week, the U.S. House Select Committee investigating the plot by ex-President Donald Trump to overturn the results of the 2020 presidential election zeroed in on John Eastman. Eastman, while serving as the University of Colorado’s “Visiting Conservative Scholar” sponsored by the controversial Bruce D. Benson Center for the Study of Western Civilization, worked directly with Trump to develop the plot to overturn American democracy.

Both before and after the 2020 elections, CU Regent Heidi Ganahl sang the praises of John Eastman and the Benson Center. Ganahl called Eastman “fantastic” and lauded Eastman for “riling folks up” after Eastman wrote a disgraceful and widely-condemned op-ed questioning Kamala Harris’ citizenship.

And then came January 6th. Thanks to the Select Committee’s investigation, we now know Eastman was aware that his plan to overturn the election on January 6th, 2021 was illegal, but Eastman and Trump relentlessly pressured Vice President Mike Pence to go along anyway. After the January 6th coup attempt failed, Eastman even requested a pardon from President Trump for the crimes he knew he had committed.

Last spring, our friends at New Era Colorado launched a campaign calling for the Bruce D. Benson Center for the Study of Western Civilization to be shut down. If you haven’t already, take a moment right now to sign their petition.

This weekend the Denver Post editorial board, in light of the revelations made by the January 6th Committee, agreed with New Era Colorado: it’s time to close the Benson Center.

The House Select Committee to Investigate the January 6th Attack on the U.S. Capitol has made it abundantly clear this week that then-President Donald Trump planned and executed an immoral scheme to retain the White House over the will of American voters.

Trump’s right-hand man in this coup attempt was John Eastman, a professor who at the time was in a position of power at the University of Colorado’s Bruce D. Benson Center for the Study of Western Civilization.

Let the irony of that sink in…

We do not see how CU’s Benson Center can withstand such a scandal. The University of Colorado Regents should revoke the center’s space on campus, return the gifts, grants and donations funding its work, and remove CU’s good name from the center’s title. CU Regent Heidi Ganahl, who once referred to Eastman as “terrific,” should lead the effort.

Today as a candidate for governor, Heidi Ganahl is running away from her former praise for Eastman, even though she defended Eastman against being fired outright by CU in the aftermath of the January 6th insurrection. Ganahl, the only statewide elected Republican, refuses to put country over party and condemn in clear terms John Eastman’s attempt to thwart the peaceful transition of presidential power.

That means it’s up to us to stand up for academic integrity at Colorado’s foremost public university, and demand the end of “conservative affirmative action” in higher education.

Thank you for taking action to protect CU and our whole state. Democracy is an original Colorado value.