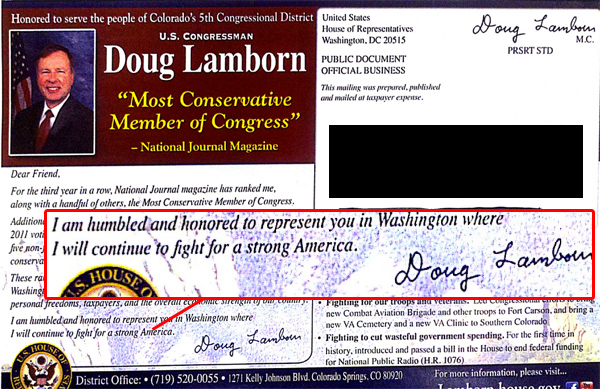 Via John Schroyer of the Colorado Springs paper, GOP CD-5 primary candidate Robert Blaha has filed a complaint against incumbent Rep. Doug Lamborn over an official “franked” mailer sent to district residents. The mailer prominently bills Rep. Lamborn as the “Most Conservative Member of Congress”–based on his ranking as such from National Journal Magazine.

According to Schroyer, Blaha is asserting that this mailer violates House franking restrictions against personal references and references to parties, as well as use of “political slogans.”

It’s tough to predict what will happen with this complaint, but it should be pointed out that franked mass mailings must be pre-approved by the House Franking Commission. So this mailing has arguably passed its biggest oversight hurdle. But as an example of Lamborn pushing the envelope of the rules to benefit himself in his primary against Blaha, even if no express rule violation is found, we could see this incident taking its toll among CD-5 GOP primary voters.

Remember, these are voters who are most sensitive to claims of “government waste.”