Sorry, Nobody Needs An AR-15 To Kill (Non-Fiction) Raccoons

Rocket Raccoon, the only raccoon in the galaxy you might want to have an AR-15 handy against.

Colorado Public Radio’s Caitlyn Kim reports on debate yesterday in the U.S. House over the Protecting Our Kids Act, legislation to combat gun violence by raising the age for gun purchases to 21 along with a federal ban on high-capacity magazines similar to the law passed in Colorado in 2013. While Colorado’s Rep. Joe Neguse once again made Coloradans proud with his clear-headed arguments in favor of action, GOP Rep. Ken Buck took the debate in a different, less serious direction:

Buck said he would not support the gun control package. Like other Republicans, he argued none of the measures “would have prevented what happened” in the most recent mass shootings.

“We have a serious problem involving family, involving drugs, involving mental health. We have gone in the wrong direction in the last 40 or 50 years.” Buck said. “Blaming the gun for what’s happening in America is small-minded.” 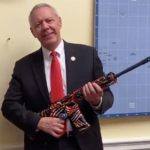 Buck’s suggestion that a weapon designed to slaughter 150-pound humans en masse is the “gun of choice” for ranchers protecting their chickens from 15-pound raccoons drew instantaneous nationwide scorn, even though laughter is not easy in the immediate aftermath of another mass shooting carried out with one of those same AR-15 rifles:

Yo, Ken Buck, I have killed a raccoon with a pellet gun air rifle. You dont need a .223 Caliber army rifle for your farm pests unless they have been in one of those gamma ray testing subject movies! #DumbAss. https://t.co/QVyOPft827

I’ve fended off racoons with a golf club. I’m no cactus expert. But I know a prick when I see one.

Buck later Tweeted that “Democrats are using the shootings in Buffalo, Texas, and Tulsa to push for more gun control—even though they know this legislation wouldn’t have prevented any of these recent tragedies and won’t make any of us safer.” But like suggesting that ranchers need assault weapons to kill varmints, that’s simply not true: the Buffalo, New York grocery store shooting that targeted African-Americans last month, the most recent school shooting in Uvalde, Texas that killed 21 people last week, and the shooting a year ago at a Boulder, Colorado grocery store were all carried out by individuals who purchased AR-15s under the age of 21. The Protecting Our Kids Act would raise the minimum age to purchase an AR-15 to 21, meaning it would have directly prevented the shooters in those three incidents from obtaining their mass murder weapons.

It’s a fusion of wrong and silly with a dash of terrible that takes a guy like Buck to pull off.