We went from Reading Rainbow to Randy Rainbow in a few decades, but don’t dare say the Left is grooming our kids! 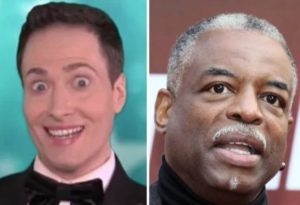 The coast-to-coast moral panic from the religious right over a flashcard that apparently depicted a pregnant person with short hair resulted in the resignation of the teacher involved yesterday, and police dispatched to the campus to provide additional protection for students and staff. It was not the finest hour for the state of North Carolina or pouncing opportunistic culture warriors like Rep. Boebert.

But thanks to Boebert pulling two beloved cultural icons into her rant, LeVar Burton of the long-running kids’ show Reading Rainbow along with the hilarious and impenitently gay Boebert-bashing Youtube star Randy Rainbow, some good may come this despite Boebert’s meanspiritedness. The Wrap:

But for one fan, Tuesday’s Twitter exchange between Rainbow and Boebert inspired an idea. “Personally, I think this calls for a collab from Randy Rainbow and @levarburton!” they replied. And then, the “Reading Rainbow” host himself stepped in.

It appears he’s open to the idea, tweeting at Randy Rainbow asking if they should pursue it. Now, fans of the two may need to thank Boebert, as Rainbow enthusiastically replied “Butterfly in the sky, I’d say it’s worth a try… (Yes!!!)”

Burton already has the wheels turning:

That’s as much as anyone knows about Burton and Rainbow’s forthcoming collaboration, but “Burton and Rainbow” seems like a great name for whatever it is! We don’t need the credit, don’t worry.

We’re much more excited to see it than Lauren Boebert’s next Twitter nastygram.