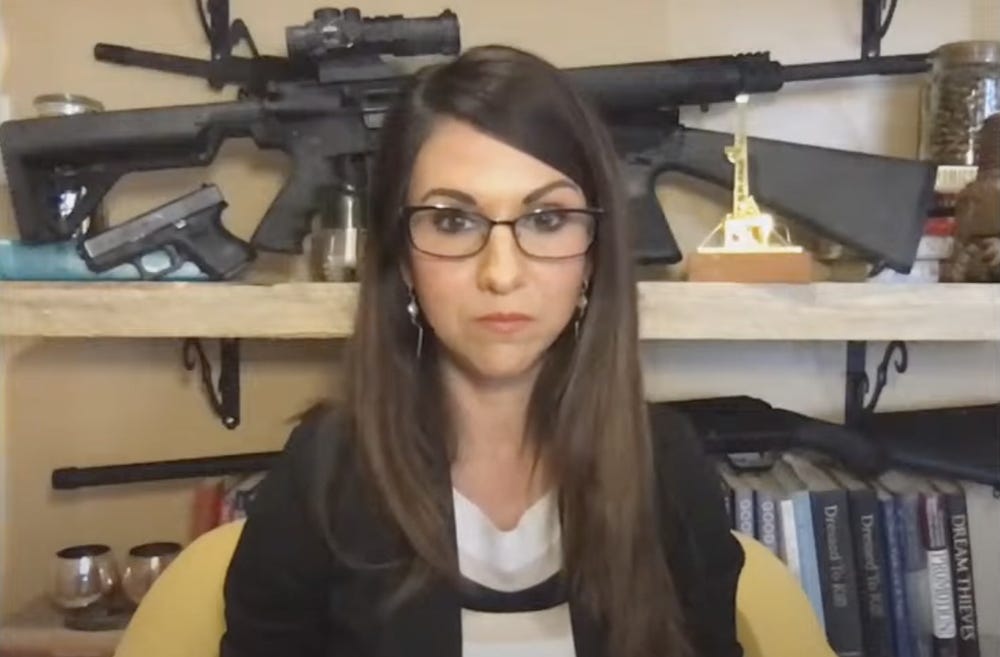 By David O. Williams for the Colorado Times Recorder.

That prompted congresswoman Alexandria Ocasio-Cortez to ask, also on Twitter, “Why even be in Congress if you don’t believe in doing your job? Just quit and let someone who actually gives a damn do it instead of acting like a useless piece of furniture when babies are shot with AR15s that we let teen boys impulse buy before they can legally have a beer.”

Boebert, a Western Slope Republican who carries a handgun and rose to prominence as a hardline gun-rights advocate, fired back at Ocasio-Cortez, a Democrat: “Ms. Defund the Police, Gun Free Zones have proven to be deadly. Let me know when you’re ready to do your job and effectively protect our schools with armed security. Let’s meet and solve this.”

But the Uvalde shooter reportedly was confronted by both an armed school security officer and two police officers, who he shot before barricading himself into a classroom and killing 19 students and two teachers. In a May 14 massacre at a grocery store in Buffalo, an armed security officer also unsuccessfully confronted a shooter who killed the guard and nine others.

Asked by the Colorado Times Recorder on Wednesday about this discrepancy in her tweet and why Congress shouldn’t try to legislatively limit assault weapon access for young people who may have mental health issues, Boebert spokesman Benjamin Stout emailed: “It was literally an armed border patrol officer that stopped ended the violence in Uvalde.”

The Uvalde shooter, however, entered the school after armed officers failed to stop him, and was inside for more than 40 minutes before being killed by police.

In the Buffalo attack, the 18-year-old killer cited the “great replacement” conspiracy theory that elite liberals and Jews are replacing native-born white people with immigrants and people of color in order to gain more votes for Democrats. It’s a debunked theory that Boebert strongly believes in.

“Yes, there is definitely a replacement theory that’s going on right now,” said Boebert last year in a Youtube video. “We are killing American jobs and bringing in illegal aliens from all over the world to replace them if Americans will not comply.”

Asked about the extreme violence associated with the conspiracy theory and whether it should be repudiated by politicians, Stout replied it was a creation of Democrats.

“Regarding replacement theory, it was first espoused by members of the Democrat party long before Congresswoman Boebert,” Stout emailed, citing Fox News.

Boebert on Wednesday also went after Texas gubernatorial candidate Beto O’Rourke, who confronted Texas Gov. Greg Abbott Wednesday at a press conference on the Uvalde massacre and accused him of “doing nothing” to stop the slaughter. Boebert called O’Rourke, a former Democratic congressman and presidential candidate, “a sick son of a bitch” and blasted him for “storming a press conference meant to discuss a tragedy to push his doomed candidacy,” calling it “disqualifying.”

However, Boebert did a nearly identical thing to O’Rourke in Aurora in 2019, and it launched her primary campaign that resulted in her improbable 2020 congressional victory.

“When Beto O’Rourke announced emphatically from the [presidential] debate stage how he’s going to take your AR-15’s and your AK-47’s, I kind of just sat back and bickered about it here at home and then that was it,” Boebert said in 2020. “Then when he announced that he was going to Aurora, Colorado, I said, ‘I’m not going to sit at home and complain about this because that doesn’t do anything. I’m going to go and talk to this guy.’

“I just wanted to go and give him a piece of my mind. But I was able to get ahold of the microphone with my Glock [handgun] on my hip, and I looked him in the eye and told him, ‘Hell no, you’re not,’ and so of course that went viral,” Boebert added.

O’Rourke, in response to a white supremacist and replacement theory conspiracist who killed 23 Latinos at an El Paso Walmart in 2019, had proposed a mandatory buyback program for assault weapons.

Boebert faces a primary challenge from Republican state Sen. Don Coram on June 28. Coram’s campaign did not respond to multiple email requests for comment on the recent mass shootings and Boebert’s adherence to the great replacement conspiracy theory.