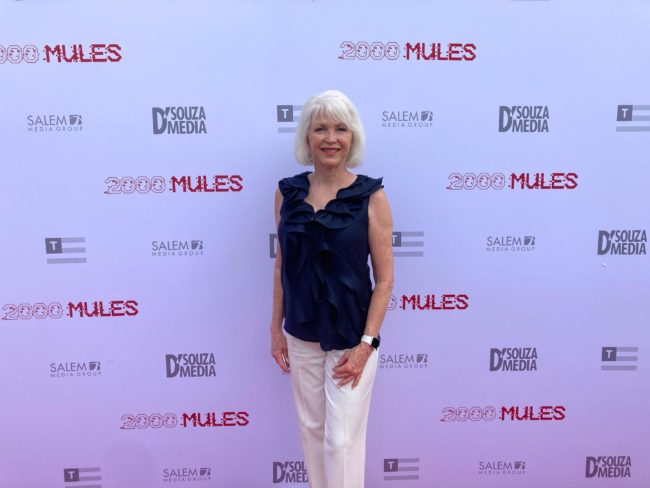 It was a tropical getaway paid for with campaign contributions:

A finance report filed last week indicates Colorado secretary of state candidate Tina Peters used campaign money to fund a trip to Florida to attend a screening of a documentary focused on baseless claims of widespread fraud in the 2020 presidential election.

On May 5, Peters attended a screening of “2000 Mules,” a film by conservative media personality Dinesh D’Souza, at former President Donald Trump’s Mar-a-Lago club in Palm Beach. The film falsely implies that rampant voter fraud compromised the 2020 presidential election, costing Trump a second term. Peters, the Mesa County Clerk and Recorder, has built her campaign around such claims of election fraud, which have been repeatedly debunked by experts, courts and election officials from both parties…

Colorado’s campaign and political finance manual states that “money spent on anything for the purpose of expressly advocating the election or defeat of a candidate is considered an expenditure.” Expenditures typically involve advertising costs, data acquisition, consulting costs or expenses for travel to campaign events around the state or district. Peters did not mention her candidacy when sharing photos of herself from the event on social media.

Newsline reports that Peters’ campaign sprang for 40 tickets to the Mar-a-Lago premiere of 2000 Mules in addition to Peters’ own travel costs. There’s are not many if any votes for Tina Peters in the upcoming June 28th Republican primary for Secretary of State in Florida, and we’d be surprised to learn that Peters’ campaign even has 40 staffers in either location, so we’re not completely sure how this all squares with Colorado campaign finance law.

But again, campaign finance violations are pretty far down on the list of Tina Peters’ problems.

With all of this in mind, one straightforward reason to spend campaign funds on a junket to Mar-a-Lago would be in search of Donald Trump’s endorsement in the Secretary of State race–an endorsement that would seem a no-brainer given Peters’ steadfast loyalty to the “Big Lie.” If Trump does endorse in this race it’s a massive boost for Peters in the Republican primary, but her story is well known enough now among MAGA primary voters that Peters might not need an explicit endorsement to win their support. And that’s good for Peters since Trump may well be hesitant to endorse a candidate facing multiple felony indictments, despite the alleged crimes in question having been committed to help Donald Trump.

Loyalty to Trump, as so many Republicans have learned the hard way, is not a two-way street.