Get More Smarter on Thursday (May 12)

You gotta love this. Let’s Get More Smarter. If you think we missed something important, please include the link in the comments below (here’s a good example). If you are more of an audio learner, check out The Get More Smarter Podcast. And don’t forget to find us on Facebook and Twitter.

► The 2022 Colorado legislative session is in the books!

For a recap of the final days and the session overall, check out these stories from The Denver Post; Colorado Public Radio; Colorado Newsline; and Denver7.

Here’s a statement from the office of Governor Jared Polis on the results of the legislative session. Lawmakers held a press conference this morning to discuss the session in more detail.

ProgressNow Colorado lists its annual “Winners and Losers” from the 2022 legislative session.

► Andrew Kenney of Colorado Public Radio explains how legislation dealing with fentanyl — the biggest issue in the final weeks of the session — turned out at the end:

The bill introduces tougher criminal penalties for the possession of a smaller amount of fentanyl, or other drugs laced with fentanyl. At the same time, reformers were able to win some new funding for treatment and other services.

The measure passed the legislature with the support of most Democrats and a small minority of Republicans. Many Republicans argued it didn’t go far enough to punish people involved with fentanyl, while some liberal Democrats warned it could help to restart a harmful “war on drugs” approach to addiction.

Perhaps the most notable change in the law is that the limit for felony possession of fentanyl has been lowered from 4 grams to 1 gram. Governor Jared Polis praised lawmakers for working “in a bipartisan, and comprehensive manner to reduce fentanyl deaths and get dealers off the streets and fentanyl our of our communities.” Blair Miller of Denver7 has more on the final bill.

► Colorado high school students are walking out of class to protest the likely reversal of Roe v. Wade:

Students from across the Denver metro are walking out to protest the leaked draft decision from the U.S. Supreme Court which seeks to overturn #RoevsWade

► President Biden ordered flags to be flown at half-staff to mark the death of 1 million Americans from COVID-19.

► As The Denver Post reports, a school board in Weld County sided with a racist and homophobic high school principal over a district superintendent.

► According to a press release from the Democratic Congressional Campaign Committee (DCCC), Democrat Yadira Caraveo and her campaign for Congress in CO-08 have been added to the national “Red to Blue” target list.

► The Huffington Post looks at how contraception bans might be next if Roe v. Wade is overturned by the U.S. Supreme Court. Republican Tim Reichert, a candidate for Congress in CO-07, gets his own mention because of a crazypants paper he once wrote in which he argued that contraception is actually harmful to women because it makes it harder for them to get married, or something.

►As Chris Cillizza writes for CNN, Democrats continue to capitalize on Florida Sen. Rick Scott’s asinine policy proposals that he is promoting partly in his role as Chair of the National Republican Senatorial Committee (NRSC).

► While other Republican candidates try to avoid the subject of abortion rights in their 2022 campaigns, Weld County Commissioner Lori Saine is taking a different approach in her bid for Congress in CO-08. 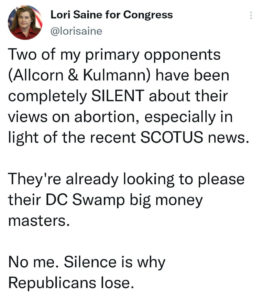 ► Apparently there IS a Republican running against Democratic Rep. Joe Neguse in CO-02.

► Finland is moving closer to joining NATO, which makes Russia very sad. In a separate story, The Associated Press explains why Finland and Sweden joining NATO would be such a big deal.

► As Colorado Newsline reports, a controversial decision to relocate the Space Force out of Colorado was probably mostly okay:

The Defense Department’s Office of Inspector General concluded that the January 2021 decision to move U.S. Space Command’s headquarters from Colorado Springs to Huntsville, Alabama, was reasonable and adequately followed the internal review process, according to a much anticipated report released Tuesday.

“Overall, we determined that the 2020 Basing Action process directed by the Secretary of Defense complied with Federal Law and DoD policy and that the process was reasonable,” Randolph Stone, the assistant inspector general for space, intelligence, engineering and oversight, wrote in the Office of Inspector General report’s opening memo.

The review into the basing decision was requested by Colorado’s congressional delegation shortly after President Joe Biden took office last year. They argued that the decision by former President Donald Trump to move Space Command headquarters to Alabama was politically motivated and have maintained that opinion.

The OIG report, however, did not find evidence of those accusations.

► The State of Colorado would pay you to get rid of your grass lawn under legislation that is on its way to the desk of Gov. Jared Polis.

► The Trump International Hotel in Washington D.C. will become a Waldorf Astoria after a sale was finalized. 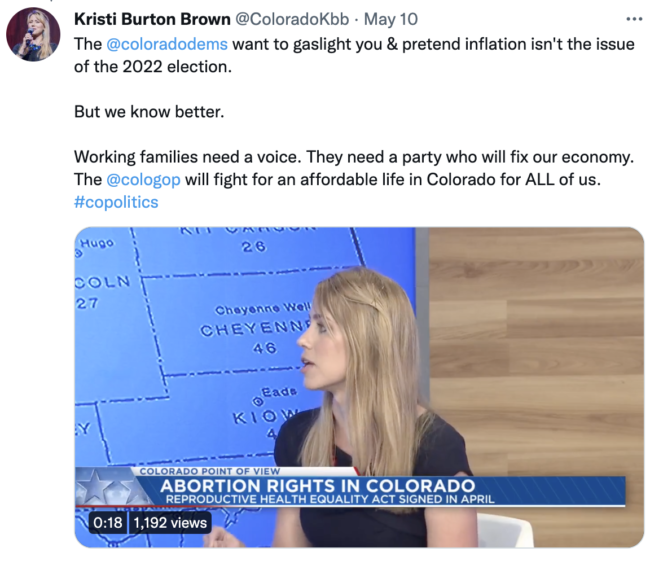 Daines on Abortion: Why do we have laws in place to protect the eggs of a sea turtle or the eggs of eagles… pic.twitter.com/yr0dM7aaAs

► POLITICO explains how “the most conservative governor in North Carolina history” ended up getting labeled a “RINO.”

► The more we learn about the decision in Aurora to fire police chief Vanessa Wilson, the shadier it looks.

► Of course 13 Republicans in the State House voted NOT to fund the police after months of yelling about Democrats (inaccurately) trying to de-fund police departments.

► If you can’t listen to all of this week’s episode of The Get More Smarter Podcast, at least make sure you catch Christy Powell’s amazing rant on abortion rights: