Vote Republican if You Want Nothing to Get Done

UPDATE: Straight from the elephant’s mouth, via Axios Denver:

The image of governing through obstruction is not pretty, particularly when must-pass legislation to fund schools and deliver pandemic relief dollars hangs in the balance.

State Rep. Patrick Neville, who formerly served as the GOP caucus leader, said it’s a bad look. “I don’t know if we have an agenda,” [Pols emphasis] he told Axios Denver. 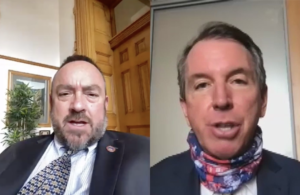 The 2022 Colorado legislative session must end by midnight on Wednesday (which means lawmakers have all of Wednesday to complete their work). There are a lot of bills that still must receive votes, and a lot more that are going to die on the vine, so to speak, because time is running out on the session.

Not only are Colorado Republicans fine with this — it’s actually part of their strategy (again). As The Colorado Sun explains in its “Unaffiliated” newsletter:

The House worked until 6:30 a.m. on Tuesday — nearly 24 hours straight. When the sun came up on Tuesday, the challenge ahead for Democrats also rose into view. “It’s only Tuesday …” one lawmaker texted.

Take this scene as an example of the fraught situation: House Speaker Alec Garnett, D-Denver, was talking with state Rep. Dave Williams, R-Colorado Springs, at 9 p.m. on Monday outside the Capitol, presumably trying to negotiate an end to the impasse, while inside the building a bill was being read at length by a computer.

Ah, yes. Republicans have returned this week to one of their favorite pastimes — demanding that every bill be read out loud in order to run out the clock on the legislative session. Republicans employed a similar tactic of performative obstruction in 2021, ultimately admitting that their big play didn’t do much; State Rep. Richard Holtorf acknowledged that this accomplished nothing, and former House Minority Leader Pat Neville expanded on that concern, saying: “It seems like when we’ve done it, there hasn’t been a sense of purpose behind it. There’s been no objective.”

Here we are one year later, and there’s still no objective. Let’s go back to the “Unaffiliated”:

“I might suggest that we look at this from the day and the week after,” state Rep. Ron Hanks, R-Fremont County, told his fellow caucus members during a meeting Monday night. “How much could we have killed and how much could we tell the entire state ‘We left 50 bills on the table because we fought this’? [Pols emphasis] I just want to say this: if anybody wants to fight, I will make myself available.”

That’s your plan for the 2022 election? You’re going to regale voters with tales of all the things that you didn’t do?

House Minority Leader Hugh McKean, meanwhile, is pretending that there is a larger goal here related to trying to squeeze concessions from Democrats. “We’re just getting to order off the kids’ menu,” he told The Colorado Sun. “It’d be nice to know that we can actually get into some of the entrées.” This is patently stupid, of course, because negotiations are pointless when THERE IS NO TIME LEFT TO DO ANY NEGOTIATING.

Voters in Colorado already know that Republicans are the go-to party if you don’t want anything to ever get done; they certainly don’t need to be reminded of that. It would have made sense for Republicans to have taken a different approach in an election year.

But yet again, it seems the Colorado GOP is not in the business of making sense.