Republican Lawmakers Call Their One Play

As Jesse Paul of The Colorado Sun noted this morning on Twitter:

OK, well a pretty serious situation is developing at the Capitol for Democrats and their agenda.

Republicans in the House were already asking for bills to be read at length to slow the lawmaking process down. Now it’s happening in the Senate. #copolitics #coleg 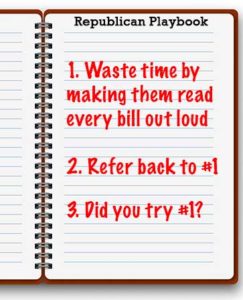 This is not new territory for Republican lawmakers in Colorado, whose primary goal in every legislative session is simply to stop anything from ever being accomplished.

Does this strategy actually work? Republicans seem to think it does, but opinions vary on whether this results in anything more than lengthening the day for lawmakers and journalists. It might be more effective now than it was in 2019, when Republicans opened the legislative session by demanding that the entire daily journal be read aloud.

The more important question is about why Republicans even want to be elected to the legislature in the first place when this is consistently their go-to strategy. There are a lot of other ways you could spend your day doing nothing (you can trust us on this one).