The 2022 Colorado legislative session officially kicks off tomorrow, which means that this week has already been filled with lots of talk about agendas and prospective bills to expect in the months ahead. On Monday, Colorado Democrats outlined their goals for the upcoming session; in response, Colorado Republicans accused the Democrats of — wait for it — stealing their ideas.

First, the Democrats. As The Associated Press reports:

Colorado’s soaring cost of living and rising crime top a list of priorities outlined by Gov. Jared Polis and fellow Democratic leaders who control the statehouse for the 2022 legislative session that begins this week.

After two legislative sessions largely devoted to the coronavirus pandemic emergency, Polis and Senate and House leaders Monday say they also will focus on continuing efforts to limit health care costs, lay the groundwork for universal preschool education, invest in mental health services and tackle fire mitigation in the aftermath of the devastating Boulder County wildfire.

“You will see a real focus this session on saving people money,” Polis said at a briefing at the Capitol.

Part and parcel of that effort is limiting or eliminating fees on individual and business taxpayers, ranging from vehicle registrations to small business startup fees, according to the governor, who was joined by Senate President Leroy Garcia, Senate Majority Leader Steve Fenberg, House Speaker Alec Garnett and House Majority Leader Daneya Esgar. 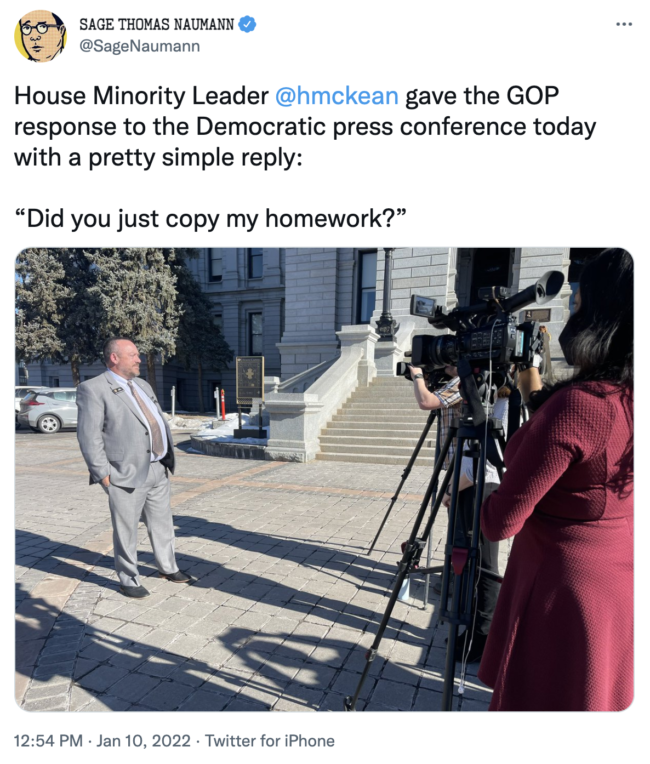 As The Associated Press continues:

Republican lawmakers complained that the focus on fees, inflation and crime stole from their own pre-session playbook.

“I didn’t hear that two years ago,” House Minority Leader Hugh McKean said of the Democrats’ commitment to fee reduction.

Really? THAT’S your message? That Democrats “copied your homework?”

It is true that Republicans held an asinine press conference back in August — you remember the “gas station” event held on the same day that Coloradans were literally choking because of the terrible air quality along the Front Range at the time — that included some of these ideas in a broad fashion. But the idea that Democrats are cribbing from Republicans is beyond preposterous. Colorado Democrats have been talking about a lot of these ideas for a LONG time…and have been actually advancing policies in this direction. For just one example, see the Tweet below that was dated about a year ago:

“This includes policies to….

The simple fact is this: If Republicans had actually come up with any of these ideas on their own and made any effort to advance those policies, Democrats wouldn’t be working on them now. As it is, Republicans are in the minority in Colorado with little chance of reversing that trend in 2022 unless they can somehow convince a majority of voters that all of the good things being proposed (and accomplished) by Democrats are really just GOP suggestions.

Every family has that weird uncle who insists that he came up with the idea of ride-sharing long before those idiot hacks at Uber and Lyft. Nobody actually listens to that uncle, just as nobody is going to pay any real attention to Hugh McKean. But this is the message that Republicans are leading with in 2022.

Good luck with that.