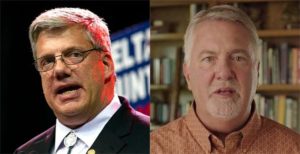 After last weekend’s debacle that was the State Republican Party Assembly, only two GOP candidates remain in the race for U.S. Senate: State Rep. Ron Hanks and businessman Joe O’Dea. Differentiating between the two finalists may be a harder task for Republicans than we might have thought.

Hanks is the center of gravity in this race, something he confirmed with his shutout victory at the state assembly on Saturday. O’Dea qualified for the June Primary ballot via the petition process, and staying away from the state assembly could have provided him an opportunity to chart more of a moderate path forward.

Except, that’s not at all what Joe O’Dea is doing.

First, from Sean Price at the Colorado Times Recorder:

At a candidate meet-and-greet in Westminster Monday, Denver businessman and Republican U.S. Senate candidate Joe O’Dea refused to speak with the Colorado Times Recorder, saying that he is not speaking to Democrats.

“I’m not talking to Democrats,” O’Dea said [Pols emphasis] when approached for an interview. The Colorado Times Recorder is a nonpartisan news outlet whose coverage reflects a progressive perspective, as explained on our website.

We get that O’Dea is still pretty new to this whole “being a candidate for public office” thing, but it’s never a good idea to vocalize the idea that you don’t plan on even having a conversation with a Democrat in Colorado. Whoever wins the Republican Primary in June will face off against incumbent Democratic Sen. Michael Bennet, who is definitely focused on talking to all Colorado voters, regardless of political affiliation.

Perhaps O’Dea believes that his checkbook does enough talking to Democrats that he doesn’t have to get involved:

But O’Dea, who owns a construction company and an event center in Denver, has let his money talk to Democrats.

He’s supported candidates from the Democratic Party since 2010, according to reports from Colorado’s Secretary of State TRACER database.

Since 2009, O’Dea has made monetary campaign donations to 13 candidates for public office in Colorado. Five of those 13 were Democrats, including then-Gov. John Hickenlooper (D-CO) in his 2014 reelection campaign.

We have no doubt that Hanks will make plenty sure that Colorado Republicans are aware of O’Dea’s contributions to Democratic candidates over the years. O’Dea may be trying to make up for this history by positioning himself firmly to the right on every issue possible.

O’Dea was a guest on The Leland Conway Show on KHOW radio on Monday, and he definitely let his (right-wing) freak flag fly. Conway asked O’Dea about eliminating federal departments; O’Dea replied that the first thing he would do is get rid of the Department of Education:

O’DEA: I think I’d get rid of [the Department of] Education. [Pols emphasis] I think we proved that here in Colorado through COVID, right? We finally got to look and see what our kids our learning. Parents around this state took it back. They took it seriously. We turned over school boards.

Conway then went on a rant about other federal agencies that could be combined or eliminated, and O’Dea was right there with him!

CONWAY: I think we could also probably roll like, the Department of Interior, the EPA, and the BLM all together in to one department, you know, the ‘office of the environment’ or whatever you’d want to call it. That could all work together as one. You could probably pare that back to one-third the size. When you talk about pruning the tree of government, there’s a lot of it. I don’t think people quite realized what our Founders intended in terms of how little the government was really ever supposed to do in our lives.

O’DEA: Oh, you’re spot on. You asked me what the first thing I would do…the second week I’d start going through the next bureaucracies. [Pols emphasis] And I think [by] the third week, you start getting good at it and we start hacking this thing back to a manageable size. We don’t need to be paying for all this.

There’s really only one of two things that could be happening here: 1) O’Dea thinks he needs to stay to the far right in order to get through the June Primary, particularly given his Democratic donor history; or 2) This is what Joe O’Dea really, actually believes.

Maybe there was never going to be an internal campaign conversation about Joe O’Dea moving toward the middle. As it turns out, O’Dea isn’t acting like a right-wing Republican at all.

A moderate O’Dea? No way.