Media Misinformation is Helping Lead us Off Climate Cliff

As numerous, detailed studies have shown, and top scientists working across many disciplines agree, agriculture is one of the most at-risk systems from the climate emergency that we are now living in, and which will only get worse in the decades to come.

How much worse, and whether fruit-growing and other agriculture in the U.S. Southwest can survive is now mostly up to us. To avert a cascade of much worse catastrophes we  must act right now.

That summation is not coming just from me. It is what the series of recent international reports, thousands of pages covering over ten thousand peer-reviewed studies and other data have all concluded.

Which makes it unfortunate to read a front-page article in the Grand Junction Daily Sentinel on the damage extreme weather in the fall of 2020 caused for fruit-growers on the Western Slope without any mention of climate change.

Overnight temperatures this week appear so far to have had minimal impacts on fruit trees in the Grand Valley as they begin blooming, but growers are continuing to deal with lingering and significant effects of damage to trees and grapevines from a freak October 2020 freeze.

…The damage occurred due to a deep freeze that suddenly hit in late October of that year, with temperatures locally falling to as low as single digits, after what had been a mild fall. Many trees and grapevines hadn’t yet hardened off for winter, leaving them vulnerable to freeze damage.

The third working group’s Intergovernmental Panel on Climate Change (IPCC) report is the final of what is now the 6th installment of this detailed, thorough assessment of global climate science. And this one “Mitigation of Climate Change,” is all about what we can do to avert far worse consequences from climate change. These include massive disruptions to the food systems and to agriculture. And the key take-away is that there is still time to act, but just barely.

The good news is that we have better practices and technologies that give us the ability today to make these changes right now. The bad news is that powerful and entrenched interests do not want to make the changes that the overwhelming weight of climate science says that we must.

For the first time, this international body of scientists from nearly 200 nations points a finger squarely at the deliberate disinformation these vested interests have intentionally spread as the globe has heated toward disaster.

And the IPCC report calls out the role that the media have played in propagating this deadly climate disinformation.

The barriers now are the fossil fuel industry’s politicians, pundits, and propaganda.

Buried in the report’s Technical Summary are a few key mentions that explain why the global community is failing to act in its own obvious best interest. Or, more accurately, who is erecting barriers to acting on the global consensus that we need to reduce warming to under 1.5°C.

“Opposition from status quo interests” to things like funding for climate programs “act as barriers to establishing and implementing stringent climate policies covering all sectors,” according to the IPCC report.

Some people will never “believe” science. Others will always lie about it despite knowing better if it suits their own vested interests. The role of journalism is to get to the facts, to uncover connections and causes, and to explain what the best and most credible information says about a subject. 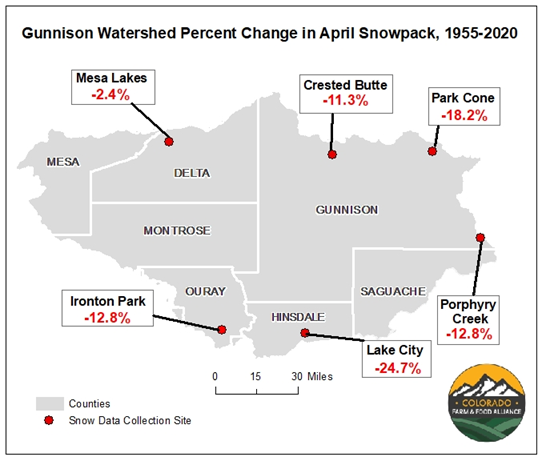 In a republic the role of media is also to inform the citizenry. This allows us, the people, to keep an eye on public policy and to stay engaged with the exercise of self-governance. Good and thorough information allows the governed to hold policy-makers, and public influencers, to account when their actions fall short.

In a crisis the role of media is to provide the information that can help us avert it. Many in the media, in their failure to properly report on the climate crisis are not inconsequential players in the delay to action which has now brought us to this critical, and this crisis, moment.

Of course journalism can also convey best available information, connecting it to actual stories – like loss of major fruit crops on the Western Slope, what the article describes as a “freak” freeze – to the moment at hand and to what the science says.

Extreme weather events and the havoc they bring to infrastructure, to public safety and health, and to the food supply, will only get worse and far more costly for each moment we fail to act.

Media can provide pertinent and sufficient information that we may respond accordingly and act in time. Or it can perpetuate misinformation further impeding action. This time the consequences of that choice are beyond severe.