The Worst Campaigns in Colorado (Round Two) 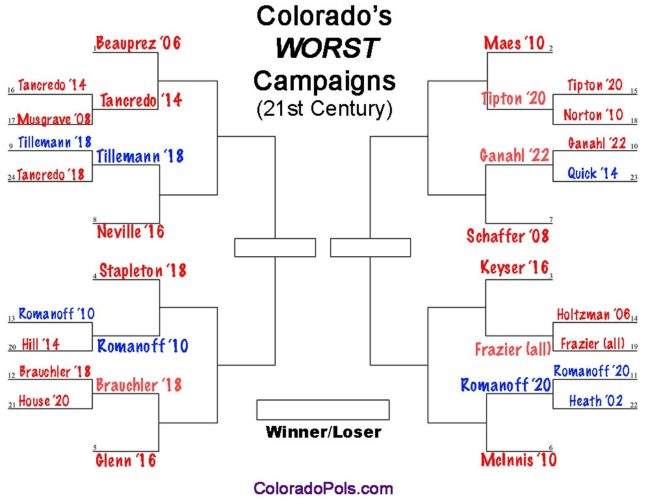 We’re moving on to the Round of 16 in our bracket of the Worst Campaigns in Colorado (This Century). If you missed the first round, click here to get caught up.

Marilyn Musgrave was a generally terrible person whose bigotry finally caught up to her in 2008 when she was defeated by Democrat Betsy Markey. She was more of a bad candidate than someone who ran a bad campaign.

Tom Tancredo was coming off a loss for governor in 2010 while running as a member of the American Constitution Party. He ran as a Republican in 2014 and seemed to be doing alright until late in the Spring of 2014. Bob Beauprez was gaining some momentum and by the end of May, Tancredo just kinda stopped campaigning. Tancredo ultimately lost the Republican Primary to Beauprez by a little more than 3 points.

Levi Tillemann and Tom Tancredo might have been opponents were they a little closer in age; Tancredo served in Congress in CO-06 until retiring in 2008.

Tancredo’s 2018 campaign for governor was a sadder version of his 2014 bid. He didn’t wait as long to stop campaigning once it became clear that there were plenty of other Republican candidates ahead of him, including eventual GOP nominee Walker Stapleton.

Tillemann was unlikely to defeat Jason Crow in a Democratic Primary, but it would be hard to have done more damage to yourself — literally and figuratively — than Tillemann did in 2018. Tillemann secretly recorded a conversation with DCCC big wig Steny Hoyer, which made him radioactive to pretty much anyone with a shred of sense. He will long be remembered, however, for macing himself in the face in a memorable and idiotic television ad. Tillemann lost the Primary by 30 points.

Owen Hill didn’t get the memo; he kept running for the Republican Senate nomination in 2014 for several weeks even after then-Rep. Cory Gardner surprised many with a late entry himself. Hill finally came to his senses and exited the race before Gardner needed to pummel him in a Primary.

Romanoff’s 2010 campaign for U.S. Senate probably should never have happened. He was upset, and rightfully so, when Gov. Bill Ritter appointed the little-known Michael Bennet in late 2008 to finish Ken Salazar’s term in the Senate. But for whatever reason, Romanoff waited to enter the Primary against Bennet until August 2009, by which point Bennet had built up a significant warchest and Rolodex. Had Romanoff jumped into the race in January 2009, he might have been able to prevent Bennet from making the kind of alliances that would ultimately prove to be impossible to overcome. Romanoff never came close to defeating Bennet, losing by about 9 points in the last August Primary in Colorado.

Steve House for Congress is CO-06 is another campaign that should have never gotten started. Democrat Jason Crow crushed incumbent Mike Coffman in 2018 by 17 points, and Colorado had only gotten bluer by 2020. House could have been forgiven, perhaps, for just going through the motions and making sure that Republicans didn’t leave Crow unchallenged; instead, House made a real effort and spent a lot of his own money on a listless campaign.

Brauchler was a candidate for two different statewide offices in 2018 — Governor and Attorney General — but it’s the former that built the resume to advance in this bracket. Brauchler was thought to be a big up-and-comer in Republican politics after getting a lot of publicity (not all of it good) in the Aurora Theater Shooting trial in 2015. He declined entreaties from Republicans to run for Senate in 2016 so that he could make a bid for the open Governor’s seat in 2018. Brauchler raised an embarrassing $98k in the third quarter of 2017, ending the false “momentum” that supporters had crowed about. In the end, donors and influential Republicans made it clear that Brauchler was NOT their guy for Governor, so he eventually dropped that bid in order to take a shot at Attorney General (after Republican incumbent Cynthia Coffman decided to run for Governor rather than re-election). Brauchler lost to Democrat Phil Weiser in the race for AG (52-45). The lingering stench of failure from his gubernatorial bid did him no favors.

As a former lieutenant governor under Bill Owens, Jane Norton was long viewed as a likely top contender for statewide office. When she finally pulled the trigger on a campaign for U.S. Senate in 2009, she showed why it had taken her so long to run her own campaign. Norton’s campaign, led by former gubernatorial candidate Josh Penry, was a disaster. She eventually lost to the lesser-known Ken Buck by three points, but the margin felt much larger.

As for Tipton, it’s not entirely clear that he even RAN a campaign in 2020. Seeking his sixth term in CO-03, Tipton’s campaign had somehow come to the conclusion that he was completely safe in a Republican Primary (rumor has it that Tipton’s internal polling showed him ahead by double digits in late May, 2020). By most reports, Tipton was as shocked as anyone when he lost in June to newcomer Lauren Boebert by nearly 10 points. He committed the mortal sin for any politician by losing an election with a huge sum of money still in the bank. Tipton dropped off the face of the earth after his primary loss; it’s been easier to spot Bigfoot than to find Tipton in Colorado since he packed up his desk in December 2020.

Don Quick, then the Adams County District Attorney, was considered a rising star for Democrats when he decided to run for Attorney General in 2009. Quick didn’t raise a lot of money or do a lot of anything — it never seemed that Quick was all that interested in the campaign or the office. Quick lost by 9 points to Cynthia Coffman in 2014, but this race had been a foregone conclusion for months earlier.

Ganahl is making a strong run at the title of “Worst Campaign in Colorado This Century.” We’ve documented multiple times in this space how Ganahl’s campaign is a dumpster fire inside of a train wreck.

Marc Holtzman burst onto the political scene in 2005 and seemed positioned to make the 2006 Republican Primary a tight battle with eventual GOP nominee Bob Beauprez. But Holtzman failed to collect enough petition signatures in one particular congressional district, keeping him off the ballot for the then-August Primary. Fun fact: It was Holtzman who coined the infamous nickname “Both Ways Bob” that haunted Beauprez in the 2006 race and for the rest of his political career.

Ryan Frazier was another Republican who looked like a potential riser when he served on the Aurora City Council. He ran for Congress in CO-07 in 2010 and got trounced by incumbent Democrat Ed Perlmutter (53-42). He made another run for U.S. Senate in 2016; after barely making it onto the ballot in a crowded field of Republican candidates, Frazier finished a distant fifth behind eventual winner Darryl Glenn. Frazier tried to run again in 2019 for Mayor of Aurora, but he finished third behind eventual winner Mike Coffman. All of Frazier’s campaigns were just…bad.

Rollie Heath was the Democratic nominee for Governor in 2002, when Republican Bill Owens was seeking his second term in the big office. Owens trounced Heath by 29 points in November, marking the last time that a Republican served as Governor in Colorado. In fairness to Heath, little was expected of his campaign since Owens was not considered to be beatable; Heath ran for governor primarily so that Owens would not be unopposed, with the hope that he could do enough to help give a bump to Democrats running down-ballot.

Romanoff might have had a chance to knock off Michael Bennet in 2010 had he started his campaign earlier (see above). This was not the case in 2020. Romanoff was never going to defeat former Gov. John Hickenlooper, whose name ID was (and probably still is) as good as it gets for a politician in Colorado. Romanoff ran a similar campaign to the battle he waged in 2010, with familiar results; he ultimately lost to Hickenlooper by 55-30 in the June Primary.