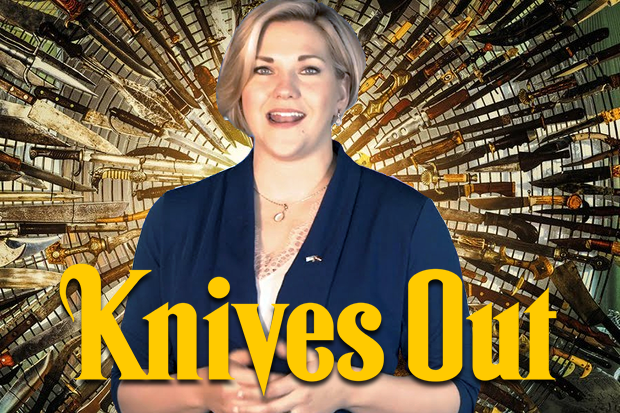 Running one of the most uninspiring and unforced error-laden campaigns for governor we’ve seen since at least the infamous Dan Maes train wreck of 2010, a key indicators of Republican “frontrunner” Heidi Ganahl’s weakness has been an inability to pull away from her primary opponents–who remain competitive and in the case of pugnacious upstart challenger Danielle Neuschwanger appear to have as much or more momentum as Ganahl going into the Republican Party’s state assembly one week from this coming Saturday.

But as we can see in a feature-length bodyslam out today from the Colorado Sun’s Jesse Paul, Ganahl’s campaign has not been idle on the opposition research front–not that it’s been difficult, since Neuschwanger has been very candid about some past troubles with the law that include several arrests and a restraining order in place against Newschwanger from a ex-boyfriend. But now, just in time to allow for proper digestion ahead of the GOP assembly, here is everything delegates need to know laid out in one story:

Republican gubernatorial candidate Danielle Neuschwanger, a top contender to take on Democratic Gov. Jared Polis in November, was arrested three times from 2008 to 2011 and also had a permanent restraining order issued against her during that period, according to court documents and police records obtained by The Colorado Sun.

Serious charges against Neuschwanger, now 34, were dropped in two of the criminal cases. In the third, an arrest for alleged drunken driving, she pleaded guilty to driving while ability impaired. Court records show her blood-alcohol level was 0.109%, above the 0.08% limit…

Neuschwanger, a real estate agent in Elbert County who is a far-right candidate with no political experience and a reputation for making controversial remarks, has risen to be one of the top contenders to win the GOP gubernatorial nomination in Colorado. At least one poll, conducted by a Democratic firm, showed her as the top Republican candidate in the race.

In 1993, [Lopez] and his wife were both cited in a domestic violence incident in which he was accused of pushing his wife, who was 6 months pregnant, to the floor and kicking her after she hit him on the top of his head. The Denver Post reported in 1994 that both Lopez and his wife pleaded guilty to a single charge of harassment.

And just so everybody’s clear:

(Ganahl says she has not been arrested before.)

Make no mistake, the facts “disclosed” by the Sun in this story are fair game, and Jesse Paul’s thorough reporting is above reproach: everything Democrats could hope for running with a similar pitch. Unfortunately for Ganahl, though, none of this information is likely to be new to Republican state assembly delegates who have done minimal research of their own–or even simply attended one of the many forums in which Neuschwanger portrays these legal problems in a sympathetic light.

They know about it, and they still like Neuschwanger. Ganahl’s inability so far to make any of these hits stick only shows again how weak Ganahl’s campaign really is. On April 9th, we’ll have a better sense of whether this blistering broadside in the Sun has helped Ganahl, but at this point we don’t anticipate Neuschwanger being knocked off the ballot at assembly–and it’s still entirely possible that Neuschwanger outperforms Ganahl there like she does in polling.

The one thing we can tell you for sure is who is afraid right now, and it’s not Danielle Neuschwanger.