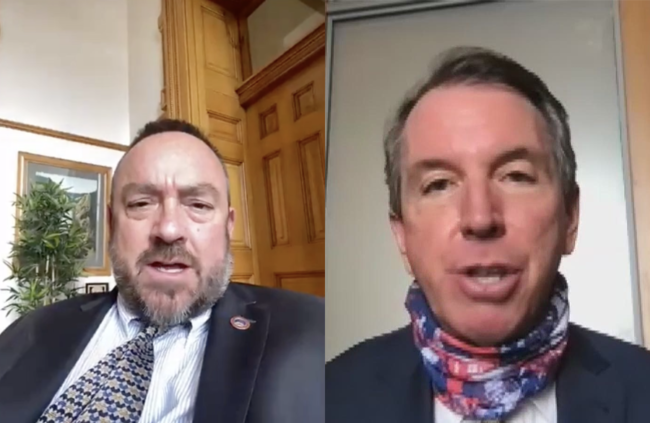 Working through the results from last weekend’s county assemblies, the number one takeaway for us so far is a pummeling for the current Republican leader of the Colorado House Minority as well as the expected succeeding GOP Senate Minority Leader, each of whom lost to upstart challengers Saturday.  In Northern Colorado’s House District 51, a former aide to hard-right ex-Minority Leader Patrick Neville named Austin Hein is riding high today after crushing House Minority Leader Hugh McKean with a decisive 71% of the vote:

Austin Hein was the clear winner of State House District 51 at County Assembly, which took place on March 19th at the Hilton Hotel in Fort Collins. Hein won 71% of the vote.

“I am deeply humbled by all the support I had today,” said Hein. “I was the underdog going in, but it’s clear my no-compromise conservative message resonated with delegates. People are sick of politicians who say one thing and do another.”

Austin is the sole candidate on the ballot through Assembly. Minority Leader McKean submitted petition signatures to make the ballot on March 11th, and is still awaiting confirmation.

Meanwhile, down in Colorado Springs’ Senate District 9, Senate Minority Whip Paul Lundeen, who runs the “independent” campaign arm of Colorado Senate Republicans known as the Senator Majority Fund and considered first in order of succession to lead Senate Republicans next session, lost his assembly vote by a smaller 52-48% margin to previously obscure conservative candidate Lynda Wilson. Lundeen makes the ballot, though he loses the top line listing. Both McKean and Lundeen submitted petition signatures, but for McKean who is still awaiting Secretary of State confirmation, those signatures are now his lifeline.

Assuming he makes the ballot via petition, Minority Leader McKean in particular should be deeply concerned about these results. McKean has faced growing dissent on the right of the dwindling GOP House Minority caucus for years, boiling over into a failed attempt to oust McKean at the end of last year’s legislative session. McKean losing to Pat Neville’s former aide would be a major victory for the Neville political clan and the infamous Rocky Mountain Gun Owners (RMGO), who struck fear into Republican primary politics for many years before a recent pushback led by failed Republican gubernatorial candidate Bob Beauprez and the “corporate wing” of the party.

As for Paul Lundeen? As we’ve been documenting for some time now, El Paso County Republican Party politics are sliding rightward out from under even candidates who imagine themselves to be “conservative enough.” There may in fact be no such thing as “conservative enough” to satisfy today’s thoroughly radicalized Republican base voters, or at least nothing we would recognize today as politically viable.

From Dudley Brown to Donald Trump, it’s a movement driven by retribution to ever-greater extremes.