Republican John Kellner is the district attorney from judicial district 18 (Arapahoe, Douglas Counties) and the likely GOP nominee for Attorney General in 2022. Tonight he’ll shake hands with donors at a fundraiser for his AG campaign that could come back to bite him in the ass before November.

The fundraiser at an undisclosed location in Greenwood Village is being hosted by some interesting names (see below), among them former Republican Gov. Bill Owens and longtime GOP operative Sean Tonner. Owens and Tonner are two of the most outspoken advocates for a “buy and dry” water scheme that would take money from the San Luis Valley and pump it into the suburbs of Douglas County.

This “buy and dry” scheme was a major story in The Denver Post late last month:

A Front Range company called Renewable Water Resources, backed by a cadre of builders, developers and former Colorado Gov. Bill Owens, wants to drill into the aquifers storing the valley’s declining water supply and pipe it to the ever-growing Douglas County.

Tonner is quick to cite poverty statistics for valley residents and says his company can pay those willing to sell their water rights and bring millions more to stimulate the local economy. It’s a win-win deal, he said.

Owens and Tonner are certainly not the first people to peddle some kind of cockamamie water scheme that exploits rural Colorado for the financial and hydration benefits of people in Metro Denver. Owens and Tonner are directing serious money to politicians who support building a giant straw over the Front Range, with the Post noting that one Douglas County Commissioner has accepted $10,000 in contributions from Tonner alone.

Incumbent Attorney General Phil Weiser has already promised to oppose this plan from a ridiculously-named company called “Renewable Water Resources,” and that puts Kellner in quite the political pickle. If elected Attorney General, Kellner could terminate the state’s opposition to this water scheme, giving it the legal and political boost it needs to survive. But if Kellner openly supports this project in 2022 after accepting big campaign contributions from the likes of Owens and Tonner, he’ll hemorrhage support from the rural voters he needs to stage a competitive challenge to Weiser.

We wouldn’t think the financial support of Owens and Tonner would offset the negative headlines that attach Kellner to their water gimmick, but perhaps Kellner thinks it’s a worthwhile trade. Or, perhaps, Kellner is already on board with the “Renewable Water Resources” idea and this fundraising assistance is just the icing on the cake.

Either way, tonight could end up being one seriously-expensive fundraiser. 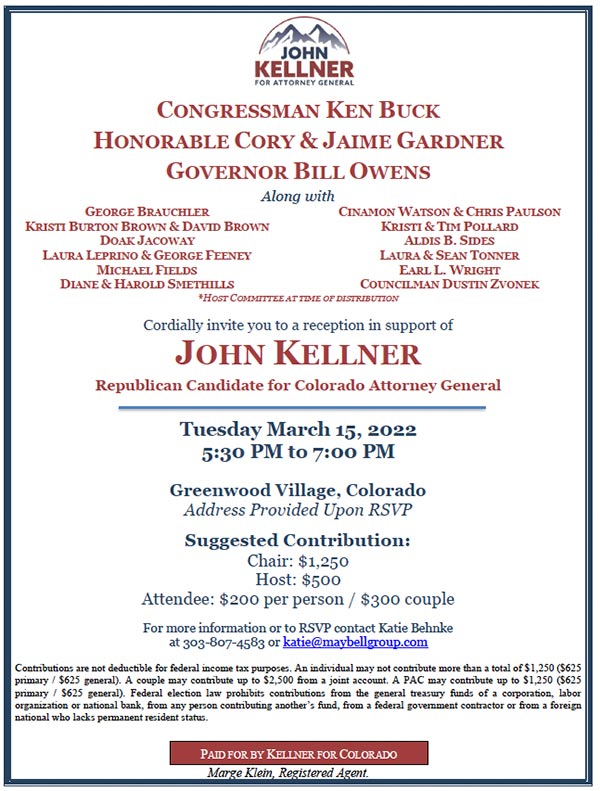