The Truth About Gasoline Prices

We’re glad the president is finally willing to sanction Russia as much as he’s been ‘sanctioning’ American oil and natural gas producers. [Pols emphasis]

In a season of bad hot takes this could be the worst yet, and it’s a window into the energy industry’s bunker mentality. This is how they really feel about sensible regulation of oil and gas drilling. Like Vladimir Putin feels after invading Ukraine!

As The Washington Post reports, President Biden will ban Russian oil exports to the United States as part of addition sanctions related to Russia’s invasion of Ukraine:

The Biden administration plans to ban imports of oil and natural gas from Russia as soon as Tuesday, following days of behind-the-scenes talks where officials studied far-flung ideas for protecting the global economy from an energy shock, four people with knowledge of the matter said.

The move represents one of America’s most far-reaching actions to penalize Moscow since the beginning of the war and would carry enormous geopolitical consequences, as the price of oil has already skyrocketed since Russia’s invasion of Ukraine, creating huge new costs for businesses and consumers…

…The administration up to now had sought to protect global energy markets from the impact of banning Russian oil and gas, while keeping a wary eye on soaring gas prices in the United States. The national average gas price on Tuesday was $4.17 per gallon, according to AAA, up from $3.62 a month ago and $2.77 a year ago.

But the ongoing atrocities committed by Russia in Ukraine, as well as bipartisan pressure from Congress, quickly changed the administration’s calculus.

The average price of a gallon of gasoline in the United States is nearing an all-time high, and that cost will likely tick upward with a ban on Russian oil — although the U.S. only imports a small percentage of its oil and gas (O&G) from Russia.

According to a new poll from Quinnipiac University, 71% of Americans support a ban on importing O&G from Russia even if it means an increase in gasoline prices at home.

Nevertheless, the price of gasoline will continue to be a talking point eagerly used by Republicans in Colorado…even if it is completely dishonest. 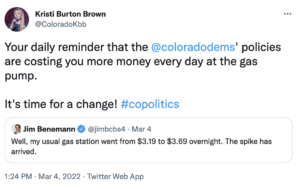 With all of that in mind, we thought it was a good time to dig into the details on how and why gasoline prices are rising (SPOILER ALERT: It’s not the President of the United States). For more information, check out this timely twitter thread from White House Press Secretary Jen Psaki (or this great press conference response). The Associated Press also has a good explainer on the details of cutting off Russian O&G exports.

Q: Why are gasoline prices rising?

Crude oil is the single largest component of gasoline, and therefore the factor that has the most influence on the price at the pump. The market for crude oil bottomed out in April 2020 because of the COVID-19 pandemic, and production worldwide has not yet caught up with demand. Russia’s invasion of Ukraine has exacerbated concerns about supply disruptions, which in turn has spooked investors into decisions that have further increased prices of crude oil.

Crude oil is a commodity that is traded by investors around the world; in fact, it is the single most widely-traded global commodity. If traders are paying more for crude oil, then so are gasoline producers…and those costs are then passed along to consumers.

Basic supply and demand issues also affect the price of gasoline. It’s not a coincidence that gas prices generally rise in the summer months, when more Americans are taking road trips.

Q: Republicans say that we need to return to a time when the United States was “energy independent.” Was this ever true?

Depending on your definition, the U.S. is “energy independent” already. As the United States Energy Information Center explains:

Historically, the United States has been a net importer of petroleum. During 2020, COVID-19 mitigation efforts caused a drop in oil demand within the United States and internationally. International petroleum prices decreased in response to less consumption, which diminished incentives for key petroleum-exporting countries to increase production. This shift allowed the United States to export more petroleum in 2020 than it had in the past.

Since 2010, the United States has exported more refined petroleum products, including distillate fuel oil, hydrocarbon gas liquids, and motor gasoline, among others, than it has imported.

The U.S. could be considered energy independent if you limit the definition of “independence” to merely exporting more oil and gas than you import. But this doesn’t account for the fact that Americans still consume more O&G than the country produces overall.

However…the literal price of energy “independence” would lead to significantly reduced profits for O&G companies. These companies are raking in billions of dollars in profits, but rather than invest in new production, they are returning hundreds of millions of dollars to shareholders via stock buybacks. These companies are making more money than they have made in years – they’re just not reinvesting those profits.

“We’ve changed our model and it’s a contract with our shareholders,” said Pioneer Natural Resources CEO Scott Sheffield. After averaging 16% annual production growth from 2016 to 2019, the largest Permian-basin producer is now “only going to grow 5% a year,” he said.

Major oil companies are making mega profits again, but say their priority is to return cash to investors rather than boost spending on new fields.

Crude oil production in the United States is currently at record levels, but O&G companies don’t want to increase production much further because a) It would cost money to ramp up production, and b) Doing so would reduce profits, which would reduce gains for shareholders. If the Biden administration mandated more O&G production in the United States, it would essentially be requiring O&G companies to reduce profits. You can’t be a fervent free market supporter AND push the government to increase O&G production.

This isn’t just a private industry decision, either. Back to Bloomberg:

Countries with limited energy resources generally don’t strive for self-sufficiency because they can achieve better economic results with imports — being heavily dependent on fossil fuels from abroad certainly didn’t thwart the economic rise of Japan and China.

Countries with lots of energy resources generally don’t strive for self-sufficiency either, because they can achieve better economic results by exporting.

One other factor to consider: If the U.S. increases production and thus increases the price of O&G exports, that will reduce the number of exports of other goods from countries importing energy from America. There is a delicate economic balance that must be maintained.

Q: If we produced more O&G in the United States, wouldn’t that lower the price of a gallon of gasoline?

Probably not. The price of gasoline is largely dependent on the price of crude oil, which is a global commodity; the United States alone cannot significantly alter the price of crude. If the U.S. increased production but other top producers (such as OPEC+) did not, then the total price of crude wouldn’t change all that much.

“There is no observable link…between movements in the U.S. petroleum trade balance and in the gasoline prices Americans pay.”

Q: Is cutting off Russian oil exports going to be a significant blow to Russia and/or the United States?

Russia is the third-largest petroleum and liquid fuels producer in the world, following the U.S. and Saudi Arabia. Most of the O&G imports in the United States – 52% – come from Canada. Only about 7% of total American petroleum imports come from Russia.

Could the United States reduce Russian O&G imports even further? Perhaps, but only to a degree; it is incorrect to say that Americans have a “reliance” on foreign O&G sources (sorry Heidi Ganahl).

Q: How is President Biden responsible for lower O&G production?

“The Interior Department processed more oil and gas drilling permits during Biden’s first year in office than three of the four years of the Trump administration. The U.S. became the world’s largest exporter of liquefied natural gas this year, and domestic oil production is forecast to reach about 12 million barrels a day, putting it close to where it was before the Covid-era collapse in fuel demand in 2020.”

Q: Wait, but if we’re producing more O&G overall – though not as much as we COULD produce – then why is the cost of gasoline increasing?

Two words: Free Market. Crude oil is a global commodity and the price is set on the world market. There is no separate price for “American crude oil” or “Russian crude oil.”

From The New York Times:

While the United States is now the world’s biggest producer of oil and natural gas, energy prices and supplies still move up and down based on events outside the control of Washington or the American oil industry. Even before the Ukraine crisis, political instability in countries such as Venezuela and Libya curtailed global oil supplies.

Here in Colorado, there are thousands of open well permits. Companies are CHOOSING not to increase production for their own profits. These companies are happy to let others blame the government for price increases at the pump.

Q: So, how CAN you lower gasoline prices?

Major O&G producers could lower prices by increasing production (boosting supply). The government could open up more drilling permits, but that wouldn’t make much of a difference unless the lease owners decided to launch new drilling operations.

You could try to convince investors to sell crude oil portfolios, which could theoretically lower the price of oil and, thus, the price of gasoline.

The best way to lower the price of gasoline is to stop using it, which is exactly what happened during the 2020 COVID-19 pandemic.

“Gasoline prices aren’t high right now because Joe Biden “destroyed American energy dependence.” They’re high mainly because the collapse in energy demand at the beginning of the pandemic caused oil producers around the world to cut back on pumping and investment.”

8. The only way to protect US over the long term is to become energy independent. That is why the President is so focused on deploying clean energy technologies that don’t require fossil fuels bought and sold on the global market, which will always be vulnerable to bad actors.