FRIDAY UPDATE: As the Salina Journal reports, the “2022 Colorado Freedom Convoy” lost whatever heft it had departing Aurora yesterday afternoon on its first leg into Kansas:

Although they arrived in Salina several hours later than expected, the truckers who left from Golden and Aurora, Colorado were met by both well-wishers and fellow truckers who were ready to join the convoy in the morning.

Half a dozen semis and 10 passenger vehicles pulled into Salina just after midnight, early Friday morning, hoping to rest before rolling out again. [Pols emphasis]

Half a dozen semis? We’re sorry to report that’s not enough to block anybody’s Beltway.

For reference, the California “Freedom Convoy” that started out last weekend arrived at its first stop in Las Vegas with a whopping five trucks in their “convoy,” at which point the trip was unceremoniously abandoned. How far will Colorado’s half-dozen Freedom Convoy first leg survivors get, and what will happen when they get there?

Over in Salina Kansas, as the Salina Journal’s Alice Mannette reports, they’re bracing for impact as Colorado’s contingent of the “2022 Colorado Freedom Convoy” of semis and other high capacity phallus-compensator motor vehicles is set to make its first major locust-like descent on the road to reckoning in Washington, D.C. next week:

A Freedom Convoy, inspired by the Canadian protest of COVID-19 mandates, will roll into Salina Thursday evening. Heading out of Aurora, Colorado, on Thursday morning, the convoy will roll across Interstate 70 and stop in Salina.

According to its Facebook post, the convoy will spend the night off exit 252 on I-70 at Pilot Petro Travel Center at 1944 N. 9th St. The truckers expect to arrive in Salina about 8:30 p.m.

About 9 a.m. Friday, March 4, the truckers are expected to head back onto I-70 and travel through Topeka, Kansas City and on to Missouri as they head to their final destination of Washington, D.C. They hope to have a “slow roll” through Junction City and Topeka, arriving in the Kansas capital about 10:30 a.m… 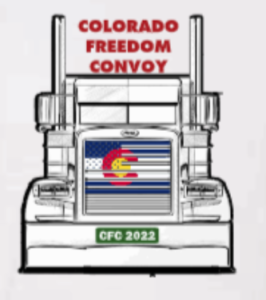 It could be the biggest thing to hit Salina since…well, at least since last year’s Tri Rivers Fair! Last Saturday, GOP gubernatorial candidate Heidi Ganahl headlined a “pre-roll” rally from Monument to Sedalia along I-25 featuring some dozens of would-be convoyers. We have no idea how many people are actually expected to head east on I-70 tomorrow, but they’re hoping to do better than the ill-fated “Freedom Convoy” that departed the Los Angeles area last week:

A caravan of truckers that left California for Washington, D.C., Friday to protest COVID mandates arrived in Las Vegas Saturday with only five trucks in its ranks, organizers revealed, prompting them to abandon the campaign and tell members to merge with other, larger anti-mandate groups racing toward the capital.

The disbanded group, dubbed Freedom Convoy USA 2022 in solidarity with the ‘Freedom Convoy’ trucker protests that occurring in Canada over the past month, said they were expecting ‘1,000-2,000 truckers’ prior to departing Los Angeles for the cross-country excursion.

Fizzling interest could be the reason why Ganahl isn’t listed as a speaker at the Colorado Freedom Convoy 2022 launch event tomorrow, which instead features a gaggle of decidedly B-List Republicans:

As for what happens after that? Well, the first real news we’ll get is how many trucks actually pull in to Salina, Kansas tomorrow night. If any of these anti-mandate protesters do make it all the way down I-70 to the Washington, D.C. area, they have promised not to disrupt the city in the manner that the Canadian trucker convoy they’re imitating did to Ottowa. The plan as we understand it is to orbit the Washington Beltway in such a way as to make the road’s already horrendous traffic…a few semi trucks worse? If any rogue elements get any ideas, hundreds of National Guardsmen are waiting to help tow semis as fast as they accumulate.

There is also the small matter that the “mandates” this convoy is out to protest are going or already gone in almost every state including Colorado as the pandemic they were put in place to address recedes into more manageable endemic-ness. Instead of a solution in search of a problem, what we have here increasingly is a “movement” in search of a grievance.

Here’s to a few trucks taking their smelly exhaust downwind in any event.