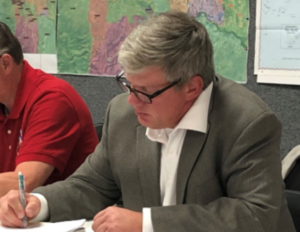 Pretty much anybody can make Wikipedia edits, though not with a pen.

State Representative Ron Hanks (R-Cañon City) is a busy guy. In his day job as a state lawmaker, Hanks spends a lot of time trying to get legislation to be discussed (with no hope of passage) that would fix all of the 2020 election fraud that never happened in Colorado. Hanks is a true believer in the “Big Lie,” having attended the Jan. 6 insurrection and repeatedly stated that it is his belief that Donald Trump actually won the 2020 Presidential election.

When he’s not on the clock at the State Capitol, Hanks is running a campaign for the Republican U.S. Senate nomination, speaking to Republicans who consider his election conspiracy ideas to be much more palatable. Hanks feeds red meat to a hungry right-wing base and generally gets plenty of applause for doing so.

Hanks is focused on getting enough Republican support to get his name on the June Primary ballot. Someone in his orbit is also trying to convince the world that his “Big Lie” beliefs are worth serious consideration by the rest of the non-right-wing universe. Recently, someone who might be Ron Hanks or might just be a big fan of Ron Hanks (we know where we’d place our bet) tried to make some fairly silly changes to Hanks’s Wikipedia page. For example:

Just before midnight on Feb. 8, a few more changes were attempted in order to, er, clarify Hanks’s presence in Washington D.C. on insurrection day.

[Side note: This explanation is similar to how Colorado Springs Gazette editorial page editor Wayne Laugesen and his wife, Dede Laugesen, explain their appearances at the U.S. Capitol on Jan. 6.]

In that same edit, someone also removed the word “conspiracy” from the sentence, “in a fundraising newsletter, Hanks continued to promote conspiracy theories regarding the certification of the 2020 election.”

Alas, all of these edits were rejected on Feb. 10 by a more senior Wikipedia user who labeled them “unconstructive.”

All of this information is publicly-available on Wikipedia. If you were so inclined, you could also use publicly-available websites to see where the IP addresses of each proposed change originated. If you went down that road, you might find that some of the edits were made from an IP address in the Cañon City area.

This might seem to be a strange use of time to most people, but it does prove once again that Ron Hanks is absolutely, positively dedicated to promoting the “Big Lie” far and wide.

In Colorado — in 2022 — that dedication just might be enough to win Hanks the Republican nomination for U.S. Senate.