The Get More Smarter Podcast Gets Some Pub 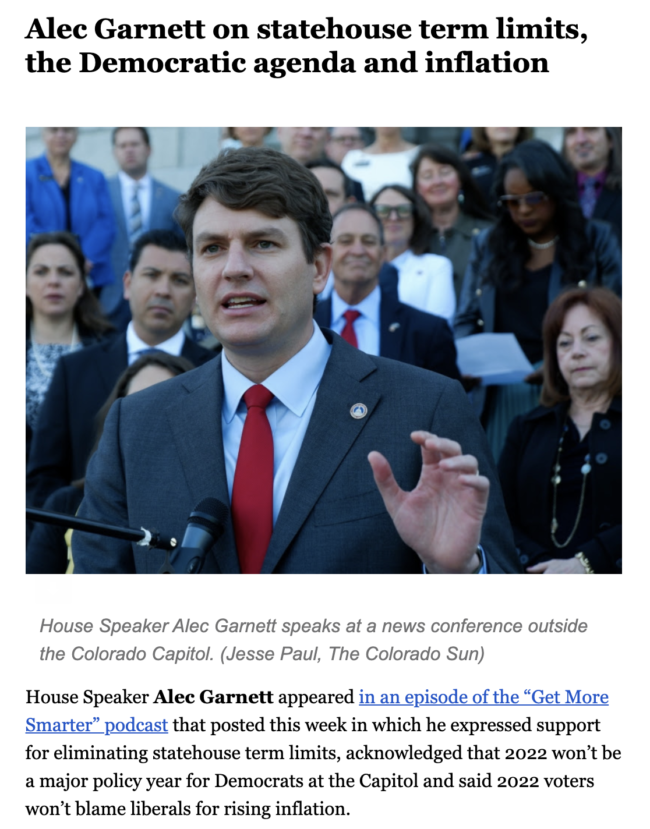 The “Unaffiliated” newsletter from The Colorado Sun

The Get More Smarter Podcast is getting some attention for our most recent episode, featuring an interview with House Speaker Alec Garnett.

The Colorado Sun picked up on the interview with Garnett for its “Unaffiliated” newsletter:

Garnett said he “probably went in a little bit too hot” when he passionately spoke in opposition to controversial Republican amendments offered last month during debate on a voting rights resolution brought by Democrats. The amendments questioned the legitimacy of the 2020 presidential election results and expressed support for nonviolent protesters on Jan. 6, 2021.

“The fact of the matter is I had never seen anything like this take place,” Garnett said in the podcast. “It was almost like the closet opened up and the skeletons of the Republican Party fell out on the House floor. … The party itself is controlled by these conspiracy theories.”

On inflation, Garnett said he’s not worried about it hurting Democrats in November.

“The amazing thing is the electorate is really, really smart,” he said. “We have the smartest electorate in the entire country. And no one blames one party or another party for these issues. People know that inflation is complicated. They don’t blame me, the Democrat at the state legislature, for inflation. We have no control over inflation.”…

…And, finally, Garnett warned about what a Republican statehouse majority would mean for Colorado.

…Garnett, who is term limited, told “Get More Smarter” hosts Ian Silverii and Jason Bane, two Democratic operatives, that he doesn’t know what’s next for him politically. He has been rumored to be interested in running to be Denver’s next mayor.

“I gotta figure out what’s next,” he said. “I don’t really know. There’s a lot of talk about a lot of different things that are out there.”

You can listen to the full interview below: