Heidi the Hypocrite: What you can do to fight for progress this week (January 24) 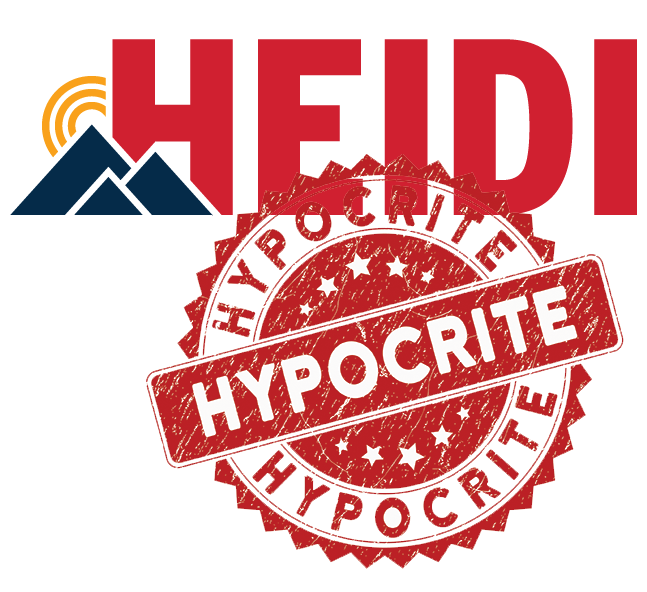 As you may have seen in the news this weekend, right-wing CU Regent Heidi Ganahl announced she’s running for governor of Colorado.

But wait, you ask. Didn’t that already happen?

And the answer is, yes it did! But Ganahl’s first launch of her campaign last September was such a dismal failure that she had to “re-launch” her campaign Saturday. Unfortunately for everyone, Ganahl’s “new” campaign is the same old hypocrisy:

Heidi Ganahl still won’t say whether she believes the 2020 election was decided fairly, despite claiming she trusts the elections in Colorado “or she would not be running.” [1]

Heidi Ganahl claims to support women and women’s rights, but she says she would “take a hard look” at signing legislation that would ban abortion in Colorado. [2]

Heidi Ganahl claims she’s for openness and transparency in government, but she hid her campaign for governor for months behind a fake “podcast” to avoid accountability. [4]

Heidi Ganahl thinks she can “shake the Etch-a-Sketch” and reinvent her weak and failing campaign, but she’s wrong–and in 2022 it’s our job to hold her accountable. Take a moment right now to support ProgressNow Colorado as we prepare to launch our campaign to tell the truth about “Heidi the Hypocrite” Ganahl. There is no better investment you can make at this moment than supporting Colorado’s largest and most effective multi-issue progressive advocacy organization.

Thanks as always for your support. With your help, every voter in Colorado will get the facts about Heidi Ganahl before it’s too late. Here are a few more ways to make a difference for the week of January 24, 2022:

Join us for our January Spotlight On, Immigrant Rights at the CO Legislature on Tuesday, January 25th at 5:00 PM. Welcome to the 2022 Legislative Session. There is some great pro-immigrant legislation that will move forward in Colorado in the upcoming legislative session. Join us to learn the details about these pieces of legislation from representatives of the various campaigns spearheading them. Learn what role you can play in their success. AFSC will provide a packet with information on the bills themselves and other important legislative information!

The next installation of Community Connections Night will be held on January 25th from 6 to 7 pm through Zoom. Programming will include an introduction to UndocuHub and a presentation about your rights at work, including important information about your rights at works during the pandemic. Towards Justice is a nonprofit law firm that represents workers in litigation and other advocacy in an effort to build worker power and advance economic justice in our home state of Colorado and across the country.

Art is always intertwined with the social, and political worlds of its creation. In this program, Professor Willa M. Johnson will tell the stories of political dissidents and Jewish men, women, and children who were interned across Europe, including in the pre-war German city of Düsseldorf and in three war-period French camps, using the work of the German Communist artist Karl Schwesig and a chorus of archival data.

In person and Livestreaming on Facebook. Please join us for a discussion with Matt Barnes, who has worked in the Northern Rockies to implement strategies that enable coexistence between livestock, wolves and griz. Matt will speak about his experiences working to prevent conflict between wolves and livestock. Matt is a range scientist, wildlife conservationist, and former ranch manager. He works with landowners and managers to improve rangeland stewardship and prevent conflicts with large carnivores such as wolves.

We’ll be back next week with more opportunities to take action. Thanks again.