Get More Smarter on Thursday (Jan. 13)

Governor Jared Polis delivers his “State of the State” speech today. In Iowa, they call it the “Condition of the State.” See, you’re already More Smarter. If you think we missed something important, please include the link in the comments below (here’s a good example). If you are more of an audio learner, check out The Get More Smarter Podcast. And don’t forget to find us on Facebook and Twitter.

► The Denver Post updates on the first day of Colorado’s legislative session, which (as always) was mostly about the speechifying:

Colorado’s 2022 legislative session started Wednesday under the shadow of a still critical pandemic, and with party leaders primed to spend months debating how to apportion a historically flush state budget, and make the state safer and more affordable.

The parties identify many of the same pressing problems, but present largely opposing ideas to address them. For the fourth straight year, however, Democrats control both the state House and Senate, plus the governor’s office, so they can always claim final say if they want it.

It’s evident once again that the COVID-19 pandemic is one subject area with little common ground. The politicization of the pandemic was clear as Democrats in both chambers donned masks and all but a couple of Republicans did not. Health care workers administered rapid virus tests outside the Capitol, and guests — unlike lawmakers — were required to mask up indoors. However, partitions between lawmakers’ desks that were taken down at the end of last year’s session did not go back up.

“Health care and public health will continue to guide many of the decisions we make in this building,” House Speaker Alec Garnett of Denver said. “Despite our exhaustion and fatigue, COVID has not relented yet.”

As the Post points out, this will be the last legislative session for many familiar names who are term-limited in 2022, including House Speaker Alec Garnett, House Majority Leader Daneya Esgar, Senate President Leroy Garcia, and Senate Minority Leader Chris Holbert.

► As The Washington Post reports, Arizona Democratic Sen. Kyrsten Sinema once again confirmed that the United States Senate is dumb:

Democrats’ hopes of finally pushing through voting rights legislation after months of Republican opposition appeared to be fatally wounded Thursday after Sen. Kyrsten Sinema (D-Ariz.) announced she would not support changing Senate rules that have long allowed a minority of senators to block legislation.

Sinema’s position, outlined in a midday floor speech, echoed her previous public statements where she defended the filibuster, the Senate’s 60-vote supermajority rule, as a tool to facilitate bipartisan cooperation and guard against wild swings in federal policy.

But the circumstances in which she reiterated it — as Senate Democratic leaders prepared to launch a decisive floor debate and less than an hour before President Biden was scheduled to arrive on Capitol Hill to deliver a final, forceful appeal for action — put an exclamation point on her party’s long and fruitless effort to counter restrictive Republican-passed state voting laws.

“While I continue to support these bills, I will not support separate actions that worsen the underlying disease of division infecting our country,” Sinema said.

What, exactly, is Sinema’s suggestion instead? We’ll let you know when we hear it. But at least West Virginia Democratic Sen. Joe Manchin approves!

► Grocery workers at King Soopers stores in Colorado are on strike after failing to reach agreement on fixing what the employees call “unfair labor practices.” As Axios Denver reports, the picketing could go on for several weeks at minimum.

► The case of Mesa County Clerk and Recorder Tina Peters and her efforts to tamper with voting equipment following the 2020 election is headed to a grand jury. And, as The Grand Junction Daily Sentinel’s Charles Ashby reports:

Peters rejected the state’s offer of a settlement agreement that would allow her access back into her own Elections Division, but only under strict supervision.

Peters said in a press release Wednesday that the “deal” the Colorado Secretary of State’s Office offered her wasn’t much of a deal, in part, because it called for her to repudiate some of her statements about election integrity.

► Senator Michael Bennet (D-Denver) continues to raise big bucks in his bid for re-election. As Ernest Luning reports for the publication formerly known as the Colorado Statesman:

Bennet raked in more than $2.1 million in the final three months of 2021, surpassing the Colorado Democrat’s own record for an off-year quarterly haul and boosting his re-election war chest to more than $4.7 million, his campaign said Wednesday.

The sum brings Bennet’s fundraising total for the 2022 midterm cycle to roughly $8.7 million as the primary field of his potential Republican challengers is still taking shape.

Meanwhile, Republican candidate/aspiring motivational speaker Gino Campana reported about $950,000 in receipts for Q4 — $500,000 of which came from himself.

► The fledgling Recall Polis-Griswold effort quadrupled its cash-on-hand numbers in Q4 of 2021. They now have four whole dollars!

► As Steve Benen writes for MSNBC, be wary of Republican claims that electing them to office in 2022 would NOT create major policy disruptions:

The Washington Post noted overnight what “resurgent Republicans” in Virginia intend to do with their power.

Among the GOP bills are those to: prohibit local governments from banning guns from parks and government buildings; cancel a minimum wage hike — from $11 an hour to $12 — that’s scheduled to take effect next year; require women seeking an abortion to sign a written consent; require voters to show photo ID at the polls; cut the early-voting period from 45 days to 14 days; and repeal a state law requiring local school boards to follow the state’s lead on transgender-rights policies.

It’s hard not to wonder how many Virginians who backed Republicans last fall, many of whom supported President Joe Biden in 2020, realized they were helping put this agenda on the table.

As for the commonwealth’s soon-to-be governor, the Post’s editorial board added this week:

Last month, Mr. Youngkin announced he would pull Virginia out of the Regional Greenhouse Gas Initiative, an emissions-cutting pact among Northeastern and Mid-Atlantic states, in defiance of common sense and, perhaps, state law. Then, last Wednesday, the governor-elect nominated Andrew Wheeler, a former Trump Environmental Protection Agency chief and onetime coal lobbyist, to be the state’s secretary of natural resources.

On the former, no one will benefit from Virginia abandoning the RGGI, an 11-state emissions-cutting agreement, and on the latter, it’s hard to justify making Donald Trump’s favorite coal lobbyist the steward of Virginia’s natural resources.

► If you were perhaps contemplating supporting the guy challenging Denver Rep. Diana DeGette in 2022, we have two words for you: Marianne Williamson.

► Has it been hot enough for ‘ya these last seven years?

► COVID-19 hospitalizations in Colorado have reached a new high.

From a national perspective, President Biden announced more National Guard help for ailing hospitals and 500 million more COVID tests for everybody else.

► Colorado may soon start massing troops at the border of Nebraska.

► It is now legal to haze wolves in Colorado, which will likely cut down on the number of wolves pledging at fraternities and sororities at state schools.

► Former President Donald Trump wants to be back in the White House in 2024, and he’s hoping that the U.S. Senate will be much more pliable if he gets there.

► It it getting warm in here, or are you just Matt Gaetz? 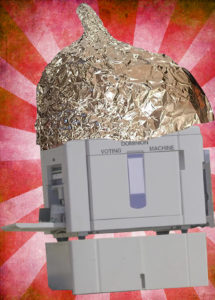 ► Vox.com wonders if maybe we should just scrap elections in favor of randomly selecting people to lead us in the future.