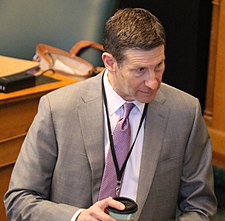 As the Colorado Sun’s Jesse Paul reports today, but we told you was coming back in September:

Former state Rep. Lang Sias, a Republican, is reentering politics with a bid to unseat Colorado Treasurer Dave Young, a Democrat, next year…

Sias has been out of politics since 2018 when he was the running mate for Colorado Republican gubernatorial candidate Walker Stapleton. Stapleton lost to Democratic Gov. Jared Polis by 11 percentage points.

Before serving as Walker Stapleton’s co-loser on the 2018 gubernatorial ticket, thus prematurely ending his legislative career, longtime Republican also-ran Lang Sias had finally managed to hold a Jefferson County Colorado House seat to which he was appointed in 2015–as a consolation prize by party brass after losing the Republican nomination in Senate District 19 in 2014 to infamous far-right Republican Laura Waters-Woods. Sias stepped down from contention for federal office in 2010 after losing the CD-7 primary to fellow perennial loser Ryan Frazier.

Lang Sias’ many sacrifices as a loyal soldier of the “establishment” wing of the Colorado Republican Party have been a metaphor for the party’s inability to control its own fate in recent years. With that said, Sias has never struck us as particularly inspiring as a candidate, and his lack of success could as easily be attributable to just plain sucking as a political figure as much as any other factor. After running in Colorado five times for four different seats and winning only the one he had already been appointed to, no Republican in Colorado has been given so much boosting only to squander it.