UPDATE: House Speaker Nancy Pelosi is calling for an investigation into the video, as The Washington Post reports in a separate story:

Pelosi’s statement echoed one issued earlier by the House Democratic Policy and Communications Committee, which also called for an ethics investigation.

“In any other job in America, if a coworker made a video killing another coworker, that person would be fired,” the group’s co-chairs — Reps. Matthew Cartwright (Pa.), Debbie Dingell (Mich.), Ted Lieu (Calif.) and Joe Neguse (Colo.) — said in a joint statement.

“Mr. McCarthy needs to decide whether he will finally stand with the American people on the side of law and order or he will continue to support violence and chaos,” the Democratic lawmakers added. 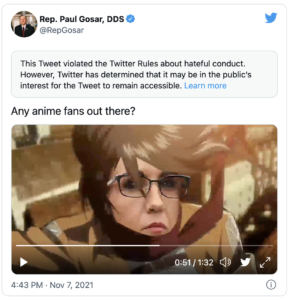 Rep. Lauren Boebert depicted as a “hero” in video from Rep. Paul Gosar.

Rep. Paul A. Gosar (R-Ariz.) shared an altered, animated video that depicts him killing Rep. Alexandria Ocasio-Cortez (D-N.Y.) and swinging two swords at President Biden, prompting condemnation and calls for his Twitter and Instagram accounts to be suspended.

Ocasio-Cortez responded Monday night after arriving in Glasgow, Scotland, as part of a congressional delegation. Gosar, she said, will probably “face no consequences” because House Minority Leader Kevin McCarthy (R-Calif.) “cheers him on with excuses.”…

…A Twitter spokesperson said late Monday that a “public interest notice” had been placed on Gosar’s tweet because it violates the company’s policy against hateful conduct.

The “anime” video also features Georgia Republican Rep. Marjorie Taylor Greene and Colorado’s own Rep. Lauren “Q*Bert” Boebert as “heroes” in the story, presumably partners in Gosar’s killing of AOC and Biden. You can see the full video here, but be forewarned: Watching the video won’t necessarily help you make any sense out of the content.

Colorado Rep. Jason Crow (D-Aurora) was one of many Members of Congress who are justifiably furious at Gosar’s video:

This is grotesque and demands action by the House of Representatives and social media companies.

Glorification & incitement of violence is not just toxic to our democracy, but dangerous for my friends and colleagues.

As far as we know, it’s probably not Boebert’s fault that she appears in Gosar’s gross video. Of course, Boebert also hasn’t commented on her cameo; if she objected to the content, she’s had PLENTY of time to speak out about taking it down.