Colorado Dems Celebrate As Biden Gets Part One Done

Denver7’s Robert Garrison reports on the final and narrow passage last night of a bipartisan roads and bridges bill by the U.S. House, a vote made possible by 13 Republicans who crossed party lines to offset “no” votes from a handful of progressive Democrats led by Rep. Alexandria Ocasio-Cortez–handing President Joe Biden a major and much-needed victory that will have voter-visible effects in the near term, but also putting the onus squarely on Democratic Senate holdouts to ensure the much larger Build Back Better reconciliation package actually gets passed:

Colorado leaders hailed the passage of the $1 trillion infrastructure package as more details as to what it will mean for the state comes to light. But not everyone was in a celebratory mood.

Gov. Jared Polis said in a statement the bill is a “win” for the state.

“Let’s fix the roads and reduce traffic! This is a win for our country and a win for Colorado! I’m thrilled that Congress has passed with bipartisan support this once-in-a-generation opportunity to improve our roads, create new jobs, improve our drinking water, and tackle climate change,” Polis said in a statement. “Paired with our state’s historic bipartisan infrastructure plan that I signed this summer, Colorado will see a transformation across all four corners of our state to make our roads safer and better for all Coloradans. Thank you, President Biden and Congress for your bipartisan work to bring real change across our country’s entire infrastructure system.”

Rep. Joe Neguse, who serves as a vice-chair of the Congressional Progressive Caucus (CPC), is ebullient and tallying up the wins for Colorado this morning:

Upgrades to our power grid💡

Although passage of the bipartisan roads and bridges bill is making some progressives nervous about the fate of the larger Build Back Better plan (more on that in a moment), this morning the big story is the red-on-red rage from conservative Republicans including Colorado’s own Rep. Lauren Boebert, vowing retribution against the “fake Republicans” who enabled passage of the bill in the House last night: 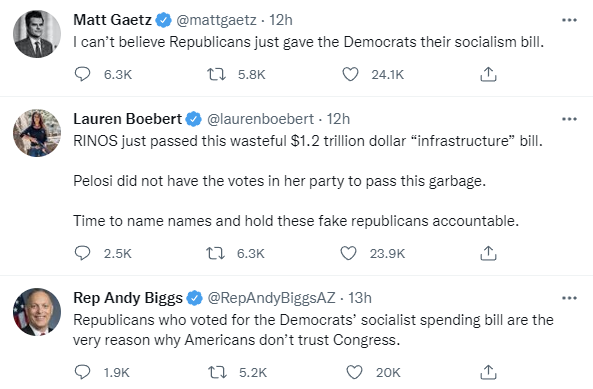 While Republicans busy themselves eating their own for a few news cycles and President Biden enjoys a major win after an undeniably difficult few months, it is necessary to acknowledge the real concerns raised by the six dissenting Democrats, who say they voted no because it had been previously assured that the bipartisan roads and bridges bill and the larger “human infrastructure” Build Back Better plan would pass as a package deal. As of now, Speaker Nancy Pelosi is operating on a promise by moderate House Democrats to support the larger bill once the Congressional Budget Office completes its necessary scoring–the same thing America’s Most Important Senator® Sen. Joe Manchin claims to be waiting for.

In exchange for accolades today, the stakes are now higher to pass the larger bill Democrats still very much need to deliver ahead of the 2022 midterms. Colorado Democrats have not at any point been part of the problem here, in fact both Sens. Michael Bennet and John Hickenlooper have seen their own priorities threatened and even cut from the bill at Manchin’s whim. It’s a major test of discipline for the razor-thin Democratic majority in Congress–and as Will Rogers famously observed in 1935, organization has never been the Democratic Party’s strong suit.

When there’s a deal, Colorado Democrats will be on the right side of it.

Beyond that, pray and/or bet according to your preference.