Get More Smarter on Wednesday (Oct. 13)

Today is International Day for Natural Disaster Reduction, which doesn’t seem like something that should be limited to a once-a-year deal. Let’s Get More Smarter. If you think we missed something important, please include the link in the comments below (here’s a good example). If you are more of an audio learner, check out The Get More Smarter Podcast. And don’t forget to find us on Facebook and Twitter.

It was not immediately clear what the projected split would be on the Senate map, approved Tuesday, since the version the commissioned adopted was drawn on the fly during a live Zoom meeting. That version made slight changes to a previous drafted map that projected 22 districts leaning in Democrats’ favor, to 13 for Republicans.

But both the House and Senate maps would have many potentially competitive seats, which was one of the goals of this commission. Recent election results suggest margins of 3.1% or under in nine House districts, and margins of 3.8% or under in seven Senate districts.

The Colorado Supreme Court will now have to approve both maps by November 15. We’ll likely have more analysis later. For additional reporting, check out Colorado Public Radio and The Colorado Sun. In the meantime, be wary of the misleading narrative that these two maps will allow Democrats to remain control of the State Legislature; if Democrats do maintain majorities in both chambers, it won’t be because of these maps.

CLICK HERE to see the approved map for the State Senate.

CLICK HERE to see the approved map for the State House.

► Colorado Public Radio reports on efforts by Trump-aligned forces to get a favorable court ruling in Colorado. CBS4 Denver has more on a two-day hearing beginning today that may include several notable figures from the “Stop the Steal” crowd. Business Insider also looks at the story from a national perspective, with credit to The Colorado Times Recorder.

► Colorado Newsline reports on a big announcement in Colorado:

Colorado has become the first state in the nation to require comprehensive gender-affirming care as part of minimum, or “benchmark,” health care plans sold on the individual and small group markets, which accounts for about a quarter of the state’s health care customers.

The gender-affirming care element was announced during a Tuesday news conference that included speakers Gov. Jared Polis and Chiquita Brooks-LaSure, administrator of the federal Centers for Medicare & Medicaid Services. Brooks-LaSure, whose agency had to approve additional benchmark items, called the move “momentous” and said “gender-affirming care can be life-saving.”…

…The gender-affirming care will be included in plans sold in Colorado on the individual and small group markets starting in 2023. It does apply to insurance obtained through large employers. New benchmark items also include an expansion of behavioral health care, including an annual mental health exam, and more options for substance abuse treatment, which were required as part of this year’s House Bill 21-1276.

John Frank of Axios Denver includes some important — and largely overlooked — key points about this announcement. This is not something that is solely about transgender care; for example, “gender-affirming care” also includes procedures such as breast reconstruction following a mastectomy.

► As Westword notes, COVID-19 hospitalizations in Colorado are at their worst level since 2020. Please get vaccinated.

► Senate Minority Leader Mitch McConnell, as disgusting as ever. From The Washington Post:

One Nation, the issue advocacy arm of the Senate Leadership Fund, plans to air television, radio and digital ads criticizing Democratic Sens. Mark Kelly (Ariz.), Catherine Cortez Masto (Nev.) and Maggie Hassan (N.H.), all of whom face voters in 2022 and have been supportive of President Biden’s agenda.

The ads, which will be paid for by undisclosed donors, describe the potential Democratic bill as a “multitrillion-dollar spending spree” and “the largest tax increase in decades” that will lead to further inflation.

You may recall that McConnell has been trying to prevent Democrats from raising the debt limit to pay for things that came FROM THE TRUMP ADMINISTRATION.

► As POLITICO reports, moderate Democratic Sen. Bob Casey is not being shy about his support for major spending bills:

“All this talk about … wow, these families are really benefiting a lot, dollar-wise, from the federal government,’” Casey recalled in a recent interview in his office, referring to GOP criticisms of Democrats for approving $1.9 trillion in Covid aid. “My response to that was, ‘Damn right, let’s do more of that. We haven’t done this, really, in 40 years.’”

► The Colorado Springs Independent provides a local election guide now that ballots are arriving in mailboxes.

► As The Colorado Times Recorder reports, three Republicans who were given awards by the State Republican Party last weekend are full-on election deniers. Neat!

► The Washington Post has the story on a nice Social Security surprise:

The Social Security Administration announced Wednesday that its beneficiaries will see a 5.9 percent increase in their benefit checks starting next year — the largest boost to benefits in close to four decades.

The cost-of-living increase, which will impact roughly 70 million people starting in late December and January, is tied to a measure of inflation that has surged this year as prices rise in a U.S. economy emerging from the coronavirus pandemic. Experts caution that millions of seniors will in reality see substantially less than a 6 percent bump, because Medicare Part B premiums are deducted from Social Security beneficiaries’ checks and are tied to seniors’ income. The increase in benefits will amount to roughly an additional $92 per month for seniors.

► As The Denver Post reports, the former head of Colorado’s Air Pollution Control Division, who has been under fire for not disclosing conflicts of interest, has been moved to a new job in state government. Garry Kaufman will now serve as deputy director for regulatory affairs in the Colorado Department of Public Health and Environment.

► The union representing television and movie production workers looks likely to go on strike, which could severely hamper your streaming habits.

► Congressperson Lauren “Q*Bert” Boebert just can’t help herself; give her a microphone and she blurts out right-wing talking points no matter the setting.

► Senator Michael Bennet keeps rolling along in his bid for re-election in 2022, raising a personal-record $2 million in Q3.

► Court-ordered doctors have found the primary suspect in the Boulder King Soopers shooting to be mentally incompetent.

► The port of Los Angeles will move to 24/7 operations in order the help alleviate problems with the supply chain for all sorts of goods.

► Vox.com reports on what it calls a better model for marijuana legalization. 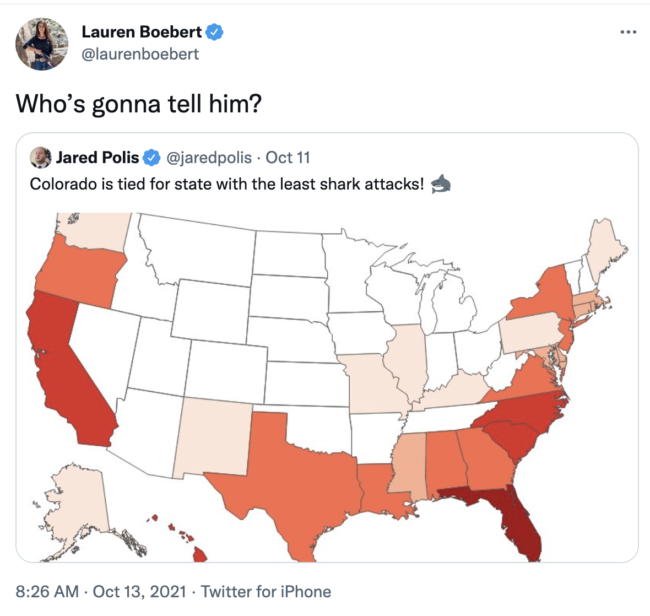 ► So, now you are apparently a “communist” if you WANT to impeach President Biden?

Greene responded to Wood’s insult by invoking allegations that he leeched off of Kyle Rittenhouse’s legal defense fund: “He lifts up his Bible high and lies and lies. He’s not one of us.”

► Here’s another warning to start your Christmas shopping much earlier than normal this year.

► If you missed that bananas press conference in Grand Junction on Monday, don’t worry: We kept a running diary for you.