Bennet Raises Another $2 million in Q3 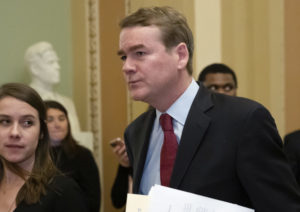 Full campaign finance numbers for the third quarter of 2021 will be made publicly available on Friday, but some figures are starting to leak out ahead of time.

U.S. Sen. Michael Bennet raised more than $2 million in the third quarter of 2021 for his re-election bid, the Colorado Democrat’s campaign said Tuesday.

Bennet, who is seeking a third term in next year’s election, has raked in $6.5 million this cycle and heads into the final quarter of the year with more than $3.5 million in the bank, giving the one-time presidential candidate a significant head start as potential Republican challengers are still getting their campaigns off the ground.

The total set a new personal best for Bennet’s fundraising in an off-year quarter, his campaign said, with the $2.06 million clearing his previous highest quarterly total — set in the first three months of 2015 — by around $3,000.

The Republican field of U.S. Senate candidates is a clusterfuck of weirdos and no-name challengers; meanwhile, incumbent Democrat Sen. Michael Bennet just keeps plugging along raising huge sums of money until the GOP figures out which no-hope candidate to nominate in June 2022.

When Democrat John Hickenlooper demolished Republican Sen. Cory Gardner in 2020 by 9 points, it all but assured that national Republican money would be staying away from Colorado’s Senate race in 2022. Bennet is making sure that Republicans have no reason to change their mind about funding strategies for the next 12 months.