Another Day, Another Nationwide Boebert Dunkfest 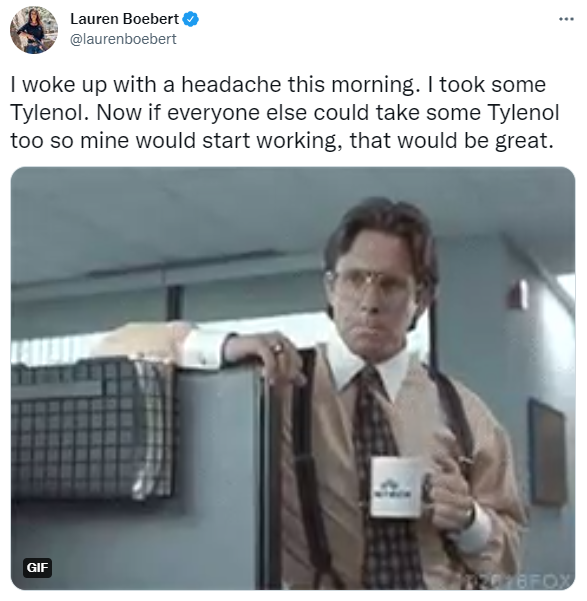 And with that, as Huffington Post’s Josephine Harvey reports, Rep. Lauren “Q*Bert” Boebert was trending once again:

Rep. Lauren Boebert (R-Colo.) got shot down by critics on Monday after tweeting a false analogy comparing the coronavirus to a headache.

“I woke up with a headache this morning. I took some Tylenol. Now if everyone else could take some Tylenol too so mine would start working, that would be great,” she wrote.

The conspiracy-endorsing Republican, who routinely fires off inflammatory tweets with apparently little regard for how much sense they make, was ostensibly trying to swipe at the push to inoculate more people in order to rein in the outbreaks of COVID-19 being driven by the delta variant and unvaccinated people…

As the New York Daily News’ Brian Niemietz explains and the whole world was able to deduce in a matter of seconds, that’s just stupid on so many levels:

Boebert appeared to suggest that people who have been vaccinated against COVID-19 shouldn’t worry about others who opt against receiving inoculations. Her posting included a clip of the 1999 film “Office Space,” where a character in a managerial position gives his subordinates instructions in a similar tone.

It was quickly pointed out to the 34-year-old politician — who according to fact-checking site Snopes.com got her GED shortly before taking office in 2020 — that unlike viruses, headaches aren’t wildly contagious and don’t mutate into deadly variants. [Pols emphasis] A headache also can’t be passed on to children or other vulnerable people who are ineligible for vaccinations.

We’ve discussed a number of times the rules we try to follow in discerning what among Boebert’s daily flood of low-information vitriol is worth covering in this space. Rather than get caught up in a daily cycle of outrage that Boebert only processes as attention, we look for patterns and trends both in Beobert’s content and the public reaction to it.

What we see increasingly in Boebert’s desperate daily attempts to stay in the spotlight is a transition: from Boebert building support with her daily outrages to Boebert simply getting dunked on en masse day after day. Although Boebert still enjoys the dopamine hit from thousands of likes and Retweets from her faithful supporters, the response from anyone other than her adoring fan base is overwhelmingly disdainful. It stands out this week even more, with Congress debating the heart of President Joe Biden’s domestic agenda and a government shutdown looming, that Boebert is off doing the only thing she knows how to do.

Republicans in CD-3 still in possession of shame should ask themselves how much they can tolerate.