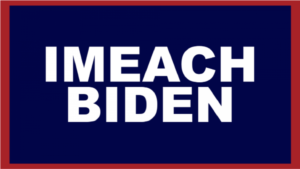 Congressperson Lauren “Q*Bert” Boebert (R-ifle) made national headlines over the weekend thanks to the absence of one little ‘p’ from a press release announcing that she had filed im(p)eachment paperwork against both President Joe Biden and Vice President Kamala Harris. Boebert wants Biden and Harris to be im(p)eached on account of “colluding with the Taliban” and related complaints connected to the U.S. withdrawal of military forces from Afghanistan.

Lost in the unintentional hilarity of Boebert’s Friday announcement was the sheer ridiculousness of calling for the im(p)eachment of Biden and Harris. Boebert officially introduced her im(p)eachment resolution on September 24, 2021, making her the fourth Republican House Member to take this action in the 9+ months since Biden moved into the White House (and the third in the month of September). By our count, Republicans in the House of Representatives have formally called for the im(p)eachment of Biden and/or Harris at least 7 times in 2021…though Boebert appears to be the first and only Congressperson to have called for Biden’s “imeachment.”

On January 21, 2021, just days after Biden and Harris took office, Republican Rep. Marjorie Taylor Greene of Georgia filed a resolution to im(p)each Biden for “abuse of power by enabling bribery and other high crimes and misdemeanors.” MTG has since filed three additional resolutions seeking to im(p)each Biden, all of them coming on August 23, 2021 (1, 2, and 3).

Not to be outdone, Republican Rep. Ralph Norman of South Carolina formally called for the im(p)eachment of Secretary of State Antony Blinken on August 27 for (again) “high crimes and misdemeanors.” On August 10, 2021, Republican Rep. Andy Biggs of Arizona filed a resolution to im(p)each Secretary of Homeland Security Alejandro Mayorkas on account of…well, you know the drill by now.

Anyway, these are all very serious people doing very critical and important things in Congress.