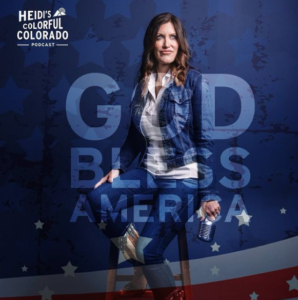 University of Colorado Regent Heidi Ganahl is the sole remaining statewide Republican elected official in Colorado. She probably can’t run for re-election in 2022 because her seat will likely be eliminated as a consequence of redistricting, but Ganahl has had her eye on higher office anyway.

Ganahl has been teasing a potential run for Governor since late 2020, doing everything short of saying the words “I am running for Governor” against Democrat Jared Polis in 2022. In fact, Ganahl might even be in some legal hot water because she is doing everything possible to look and sound like a candidate for Governor without fulfilling the required legal obligations that come with being such a candidate. From what we hear, Ganahl is likely to (finally) formally announce a gubernatorial bid shortly after Labor Day. She might want to take that extra time to work on her stump speech.

As Julia Fennell reports for Colorado Newsline, Ganahl was the headline speaker at the Teller Republicans’ “Big Tent Event” in Woodland Park on Saturday. She opened her speech with a predictable quote from former President Ronald Reagan before things went sideways:

“So there are about 300,000 voters who showed up in 2020 to vote for Trump that did not vote in 2018 in the governor’s and the other races that year,” she told the crowd. “How about we get those folks out to vote, and perhaps we might be able to win statewide elections again in Colorado, there you go!” [Pols emphasis]

First off, you might have more luck exciting a crowd by NOT telling them that “perhaps we might be able to win statewide elections again in Colorado.” Alas, Ganahl could clean up that line, but her story problem still needs some work.

Republican Donald Trump received 283,806 more votes in Colorado (in 2020) than Republican gubernatorial nominee Walker Stapleton collected in 2018. But even with the higher turnout in a Presidential election year, Trump would have barely defeated Polis. Trump’s 2020 vote total in Colorado was only 15,719 more than what Polis earned in 2018 (a margin of 0.0057%).

Of course, Ganahl also neglects to mention that Democrat Joe Biden received 439,745 more votes than Trump in 2020. Thus, Ganahl’s path to victory in 2022 only works if she manages to keep GOP turnout at Presidential election levels AND figures out a way to depress Democratic turnout back to 2018 totals. That seems totally plausible! (It would also help if more than 30% of Colorado voters could even recognize the name ‘Heidi Ganahl’).

If Ganahl does have a path to victory next November…this ain’t it.

Not that there is a better option; there’s a good reason why Republicans such as State Sen. John Cooke consider Polis to be “unbeatable” in 2022.