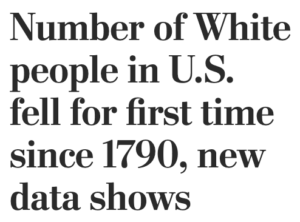 The first race and ethnicity breakdowns from the 2020 U.S. Census were announced on Thursday, part of a larger dataset that will guide the redrawing of Congressional and legislative districts in Colorado and around the country. Click here to download the files and dig through the data yourself.

We haven’t had a chance to explore the numbers in Colorado, but there are a few things we know from a broader perspective. As The Washington Post reports:

The report marks the first time the absolute number of people who identify as White alone has shrunk since a census started being taken in 1790. The White population fell from 223.6 million in 2010 to 204.3 million in 2020, a decrease of 8.6 percent.

The country also passed another milestone on its way to becoming a majority-minority society in the coming decades: For the first time, the portion of White people dipped below 60 percent, slipping from 63.7 percent in 2010 to 57.8 percent in 2020.

As The New York Times explains, the Greeley metro area is the fourth-fastest growing metropolitan area, behind The Villages (Florida); Austin-Round Rock-Georgetown (Texas); and St. George (Utah). Denver is among the 10 cities with the largest population increase over the previous decade.