(The asylum is under new management – Promoted by Colorado Pols) 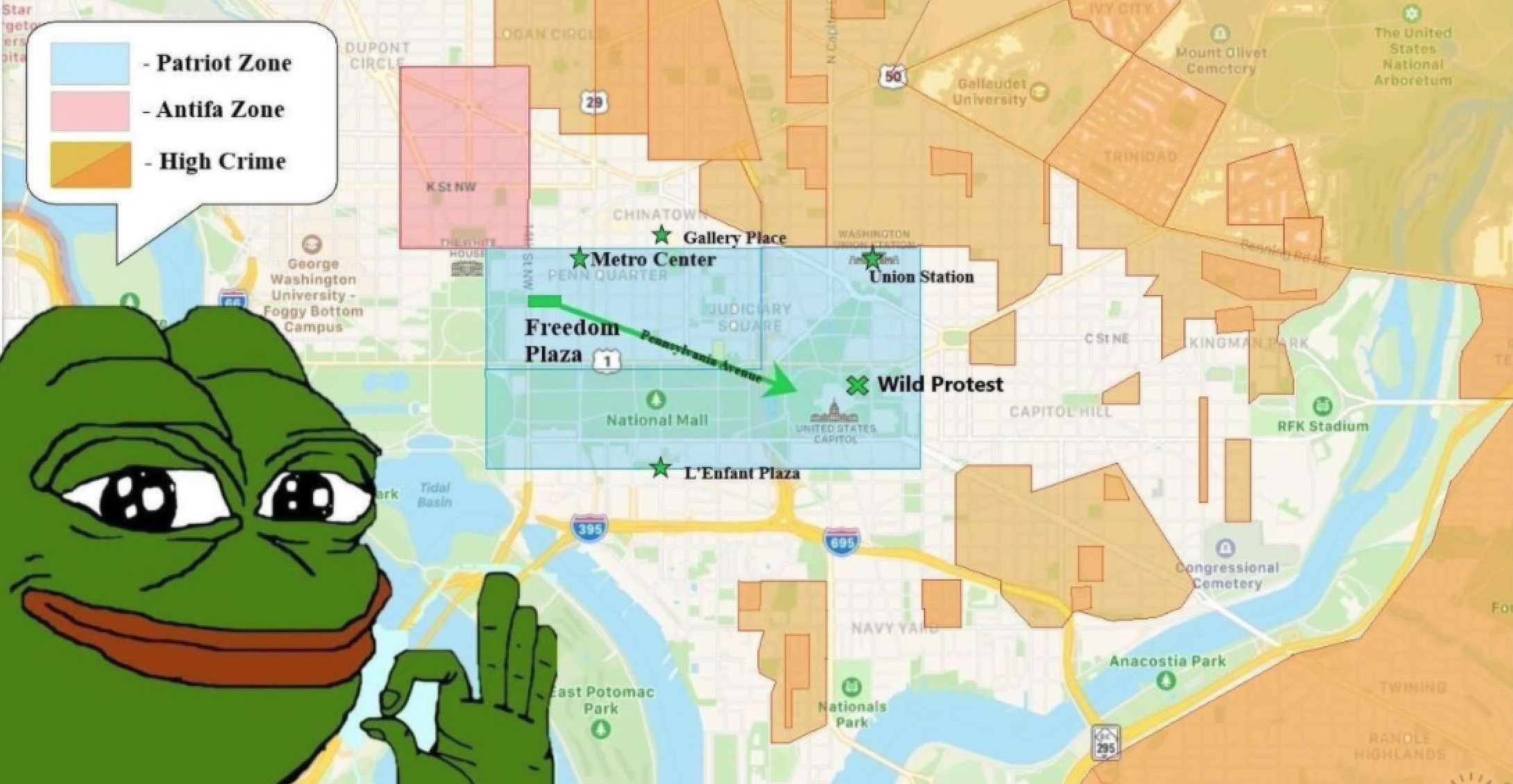 One of USEIP’s map for its Jan 6 caravan featured white nationalist meme Pepe the Frog.

The chair of the Colorado Republican Party’s new committee to safeguard the state’s elections is also a member of and working closely with a QAnon-linked election fraud conspiracy group.

The group, the U.S. Election Integrity Plan (USEIP), was founded in Colorado last November. It not only promotes the debunked “Big Lie” that the 2020 presidential election was stolen, but coordinated a caravan of protestors from Denver to Washington D.C. for the January 6 protest at the U.S. Capitol, providing routes, racial maps of the city, and a forum where attendees discussed tactics and weapons to bring to the event, which they expected to be, as President Trump called it, a “wild protest.”

USEIP organized several election fraud conspiracy rallies at the Colorado Capitol in late 2020 and early this year. and also coordinated a caravan of members. Its planning for the caravan to attend the “Stop the Steal” January 6 rally in Washington DC included not only logistical support such as carpooling, routes and lodging options, but also discussion of which weapons would be best suited for carrying during the event.

In a USEIP chat room, member Theresa Watson, who also serves as the Boulder County GOP Chair, referenced videos about how to use a “tactical pen,” which is a heavy metal pen intended not to be used as a writing instrument but as a weapon for stabbing an opponent.

“A tactical pen is a good equalizer to carry in a crowd,” posted Watson. “Jason Hanson, former CIA agent has a good quality one — I’d avoid Amazon and Walmart versions –and he has many videos about how to use and getting away quick. Plus things you thought you’d never need to know.”

Karen Kennedy, USEIP Captain for Jefferson County, shared a link to a site called “Damsel in Defense,” which offers stun guns, pepper spray, and tactical pens. She encouraged members to “order NOW and you’ll be guaranteed to received your gear by Jan 3, right before the trop to DC!” Kennedy then warned, “We can’t take chances. These mental patients are insane!”

Another member responded to her post with a link to a flexible steel baton called a “Stinger Whip,” saying it was, “for the dudes.”

That same member, “Tom,” then laid out the group’s overall goal and the tactics needed to achieve it. And while he noted that the group should try to “avoid all physical confrontation,” he also cautioned against “taking just a knife to a gunfight,” and offered a link to a manual of police foot tactics.

“On a strategic level we are all concerned primarily with making sure that our president remains in office another four years,” wrote Tom. “We are all well aware that the radical end of our opponents’ political philosophy does not adhere to any sense of fair play so on a tactical level its a good idea to have some basic skills and a plan when even the possibility of a confrontation arises. Since you are appearing in DC as a group it makes sense to use that advantage so a plan to meet up and stick together is probably self explanatory. Secondly, despite the frustration we patriots have had to endure over the past years the primary goal should be to avoid all physical confrontation. No one ever knows in advance how a fight or altercation is going to end so unless one is planning to genuinely battle it is best to avoid such confrontation if possible. DC is a disarmed city, for law abiding citizens only though, and you do not want to be taking just a knife to a gunfight. Communication as a group is very important as sticking together is your primary protection against anything scary. The ability to move and react as a cohesive unity can be pretty simple by agreeing on a few key words liKe ‘RALLY’ or ‘TO ME.’ Depending on the number of people in the group it may be wise to assign watchers on all four corners, whose primary job is to spot trouble coming. Those watching the rear can practice walking backwards while holding the shoulder of a forward facing team member. Rally points are also important so if you have a general route planned pick out rally points along the way which can be reached quickly in a chaotic situation. Here is a course guide to police foot tactics which may be helpful.”

Perhaps even more concerning than chat logs about stun guns and pepper spray are the maps USEIP posted on Dec. 29 as resources for Jan 6 attendees.

A map, which was titled “safe/unsafe zones,” labeled the National Mall and immediate surroundings as the “Patriot Zone,” and identified the march route from Freedom Plaza with a red arrow. The tip of the arrow ends at the U.S. Capitol, which is marked with an “X” and the phrase, “Wild Protest.” A small section northeast of the Mall was labeled “Antifa Zone,” but the largest section of the map is marked “High Crime.”

The map is decorated with a cartoon “Pepe the Frog” making the “OK” symbol. The image and the gesture have both been linked to the white supremacist movement.

USEIP also posted another map of the same DC region, but instead of any event marking, it was simply labeled “GreaterDC by Race,” and featured a legendless but color-coded overlay of neighborhoods’ racial demographics.

Ashe Epp, co-founder of the U.S. Election Integrity Plan (USEIP) was among the 40 or so USEIP members who traveled to Washington, D.C. on Jan 6.

“I was on the back side of the Capitol, where people were breaking in through windows,” Epp told the Colorado Times Recorder in March. “News reports said people climbed up scaffolding but it wasn’t scaffolding- they were bleachers. We just walked up a staircase.”

Longtime GOP operative Tom Bjorklund of Grand Junction also drove to DC to “go into the fray,” as he put it on Facebook.

He told his fellow USEIP members that since he was towing a trailer he would leave earlier than the main caravan, posting that he would “see them on the road.”

Bjorklund, who has worked for state Sen. Ray Scott (R-Grand Junction) and former Congressman Tom Tancredo (R-CO), was also in close touch with a current member of Colorado’s federal delegation: Doug Lamborn. Bjorklund informed the USEIP chat room on January 4 that, “Doug Lamborn texted me that he will be protesting the electors.”

In a January 15 Facebook post, Bjorklund stated that he didn’t enter the Capitol building and that he saw what he believes were “multiple Antifa type characters encouraging stupid behavior.”

“I saw people in black bloc (faces covered but with one article of Trump clothing like a hat or a bumper sticker pasted on) coming down the mall path carrying Trump flags upside down, and I knew something was up,” wrote Bjorklund. “But still, the people who blindly followed agent provocateurs’ instructions should have known better. Everything about that moment screamed THIS IS A SET UP. “Fortunately, I don’t really like loud crowds and I am allergic to flash bangs and tear gas, so I kept my distance. You won’t see pictures of me marching through the capitol building. Instead, I kinda stayed out of the madness. I was curious enough to stick around to see how things unfolded, but when it became apparent what was transpiring at the capitol, including a large trail of blood that I had to step over, I decided to leave.”

USEIP’s website proclaims, “We Are The Plan,” a QAnon conspiracy slogan intended to encourage followers to stay active despite Trump no longer holding office. The group’s chat rooms are rife with references to QAnon, the dangerous catch-all conspiracy theory that helped incite the January 6 insurrection.

Former Boulder County GOP Chair Peg Cage, who publicly expressed her support for QAnon earlier this year, posted a screenshot of a QAnon post, to which USEIP founder Ashe Epp responded with “OMG that Q post.” Epp also posted that she was “redpilling everyone I meet,” using the slang term for introducing people to the QAnon conspiracy theory.

Since Brake was appointed to “Election Integrity Operations Action Committee,” she’s has joined Epp and others to give presentations to local Republican groups.

Brake’s role in a July 20 presentation to the Mountain Republicans Club, was to discuss “the actions that USEIP is taking in Colorado to restore integrity to our elections, to push for full forensic audits of past elections and to challenge Secretary of State Jena Griswold as she attempts to promulgate illegal regulations that will further erode election integrity.”

When a fellow USEIP member flagged a conspiracy story about former Denver Elections Director Amber McReynolds’ helping to rig the 2020 elections through mail ballots, Brake responded that McReynolds was “on her radar.”

Brake, who as a member of the Boulder County GOP’s “Audit Committee” signed a symbolic letter refusing to certify their county’s 2020 election results, solicited USEIP members for help with the GOP’s “election integrity operations.” In her pitch she says the following:

“The experience base of USEIP grassroots activists like yourselves will be incredibly helpful as election judges, poll watchers, etc,” wrote Brake in the USEIP chat room. “For example, you can become involved to poll watch the running of Dominion or bring Voter Verification experience to work as a trained election judge examining voter records and determining voter eligibility during the election.”

Then she mentions “Voter Verification experience,” referencing the field operation USEIP is conducting in Mesa and El Paso (and perhaps other) counties, in which volunteers use public voter information go door-to-door asking citizens to confirm their votes in the 2020 election fraud.

At least some of these volunteers are armed. As progressive blog Colorado Pols recently reported, the USEIP El Paso County Captain “Charity M” told volunteers attending a July 24 canvass in Colorado Springs, “we are attempting to line up security. However, anyone who carries protection might want to let us know so we can offer your cell phone numbers to those who are concerned.”

Neither Brake, Bjorklund, nor Chairwoman Burton Brown returned calls, emails and/or Facebook messages requesting comment. This article will be updated with any responses received.

The Colorado GOP runs an effort called Election Integrity Operations (EIO)  that is led by the EIO Action Committee. We are now taking volunteer sign-ups for all who want to get involved in this effort. This includes anyone interested in election judging, poll watching, attorneys, party officers, grassroots activists, etc. We are holding various trainings and events this summer about how to get involved and what to look for, and what to do about it, in these roles.

The experience base of USEIP grassroots activists like yourselves will be incredibly helpful as election judges, poll watchers, etc. For example, you can become involved to poll watch the running of Dominion or bring Voter Verification experience to work as a trained election judge examining voter records and determining voter eligibility during the election.

Furthermore, the experience you’ll gain as a poll watching and election judging is something you can bring back to USEIP to enhance your work with USEIP.

If you’d like to get on our lists for upcoming events and training, please send an email to electionintegrityco@gmail.com with your name, county, and any area(s) of interest.

If you have any questions, please feel free to comment below, ping me, or send the committee an email using the email address above

Thanks for all you do!