Get More Smarter on Wednesday (August 11)

Your horoscope today says something about progress and fulfillment (probably). Let’s Get More Smarter; if you think we missed something important, please include the link in the comments below (here’s a good example). If you are more of an audio learner, check out The Get More Smarter Podcast. And don’t forget to find us on Facebook and Twitter.

► Oregon will join Louisiana and Hawaii in instituting a statewide mask mandate as concerns grow over the Delta variant of COVID-19. From The Washington Post:

The indoor mask mandate will make Oregon the third state — following Louisiana and Hawaii — to apply the measures to both vaccinated and unvaccinated people, as bans on mask and vaccine mandates play out in a number of Republican-run states such as Texas and Florida. Nevada Gov. Steve Sisolak (D) last month mandated that face coverings be worn indoors in public settings in counties with “substantial or high transmission.”…

…Brown’s decision comes as schools and political leaders battle over masks elsewhere. Florida’s second-largest school system is now threatening legal action to challenge the ban on mask mandates by Gov. Ron DeSantis (R) and voted Tuesday evening to keep its own requirements in place for students and staff.

The Broward County School Board — which voted 8 to 1 on Tuesday to uphold its mask mandate despite DeSantis’s move to curb such restrictions and subsequent threat to stop paying superintendents and school board members who defy his orders — said in an evening news conference that it told its legal counsel to prepare a challenge.

Here in Colorado, COVID-19 cases and hospitalizations are the worse they have been since May.

► The U.S. Census Bureau is expected to release final data on Thursday that will guide the process of redistricting. As Colorado Public Radio explains, there are a lot of criticisms for the redistricting commissions to sift through:

When the U.S. Census Bureau releases its final numbers on Thursday, it will start the clock on a mad dash to prepare final congressional and statehouse maps.

Nonpartisan state staffers will have just over three weeks to combine that data with feedback on the state’s draft map and release an updated version for the state’s new Redistricting Commission to consider.

For the past six weeks, Coloradans of all stripes have been weighing in on where the lines should go for the state’s congressional and statehouse districts. The final result could shape the balance of power between the parties, and the level of representation for different interest groups, for the next decade.

Ken Salazar, a former Colorado senator and member of the Obama Cabinet, became President Biden’s first ambassador to be confirmed. After a marathon voting session on the budget, the Senate acted overnight to approve Salazar as the US Ambassador to Mexico.

► Mesa County Clerk Tina Peters is furiously digging as deep a hole as possible for herself. Following news that Peters may have been involved in a serious breach of election security, she showed up at “MyPillow Guy” Mike Lindell’s lunatic election fraud symposium on Tuesday that is allegedly going to unveil “proof” of fraud in the 2020 Presidential election any day now.

► Republican Eli Bremer officially announced his 2022 campaign for U.S. Senate in Colorado. It was fine.

► The Denver Post looks at what a giant infrastructure deal in Congress could mean for Colorado:

Colorado will receive an estimated $3.7 billion for federal highway work and $225 million for bridge replacement and repairs over five years if the bill becomes law. Public transportation systems would get $917 million and $57 million would be spent on expanding the state’s network of electric vehicle charging stations.

At least $100 million would be spent expanding broadband infrastructure in a state where a recent report said 675,000 Coloradans lack reliable internet access.

That’s in addition to $5.4 billion in state funds that Colorado will spend on infrastructure and transportation over the next 11 years.

As Colorado Newsline reports, polling suggests that large numbers of Coloradans approve of the infrastructure deal.

Meanwhile, Colorado Republicans such as Rep. Ken Buck (R-Greeley) are still whining about the number of pages in the legislation.

► It has not been a good week for Colorado Republicans, who were hammered over a tone-deaf press conference staged at a gas station.

► Denver-based Dominion Voting Services has filed another round of defamation lawsuits against a handful of right-wing news outlets.

► State Rep. Richard Holtorf (R-Akron) was hospitalized after an accident with a horse. Two weeks ago, Republican Rep. Mike Lynch of Wellington also suffered serious injuries in a horse-riding accident.

► The University of Colorado at Boulder will require masks to be worn indoors to begin the fall semester.

Meanwhile, Colorado’s American Academy of Pediatrics, meanwhile, is pushing for Colorado to mandate masks in public schools as that battle rages from Cherry Creek to Poudre School Districts.

► As POLITICO reports, Senate Republicans are hoping that DEMOCRATIC Senators Joe Manchin and Kyrsten Sinema can do what they could not: Cut back the spending on a new Democratic budget proposal.

► Sunday is the deadline to sign up for health insurance on Colorado’s marketplace.

► Noble Energy has agreed to pay $1 million over oil spills in Colorado. In a separate move, Colorado authorities are fining K.P. Kauffman Oil Group for violations involving as many as 90 wells throughout the state.

► The New York Times delves into the final, desperate days of the tenure of former Gov. Andrew Cuomo.

Congressman Doug Lamborn (R-Colorado Springs) appears to have discovered emojis. Glasses of water/milk are up 5.6%! 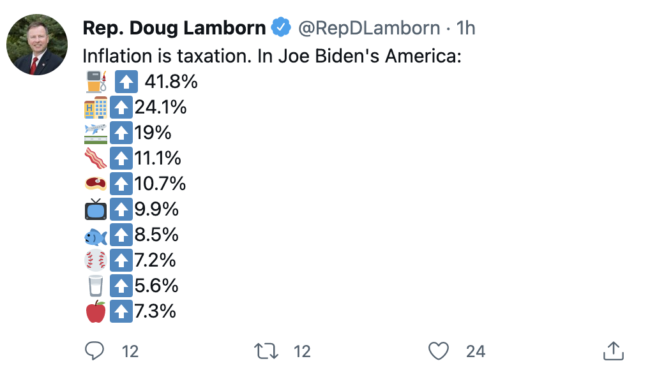 ► Former football star Herschel Walker is considering running for Senate in Georgia…only he lives in Texas. That apparently did not stop his wife from somehow voting IN GEORGIA in 2020.

► Arkansas Gov. Asa Hutchinson, whose state has one of the lowest COVID-19 vaccination rates in the country, is now trying to undo his prior support of a pre-emptive ban on wearing masks in the state.