Get More Smarter on Monday (August 9) 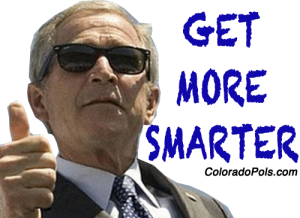 There are 137 shopping days left until Christmas. Let’s Get More Smarter; if you think we missed something important, please include the link in the comments below (here’s a good example). If you are more of an audio learner, check out The Get More Smarter Podcast. And don’t forget to find us on Facebook and Twitter.

► If you hadn’t noticed from the massive wildfires or barely-breathable air, Climate Change is a serious problem. As The Washington Post explains, scientists are pounding the ‘alert’ buttons:

The landmark report, compiled by 234 authors relying on more than 14,000 studies from around the globe, bluntly lays out for policymakers and the public the most up-to-date understanding of the physical science on climate change. Released amid a summer of deadly fires, floods and heat waves, it arrives less than three months before a critical summit this November in Scotland, where world leaders face mounting pressure to move more urgently to slow the Earth’s warming.

Monday’s sprawling assessment states that there is no remaining scientific doubt that humans are fueling climate change. That much is “unequivocal.” The only real uncertainty that remains, its authors say, is whether the world can muster the will to stave off a darker future than the one it already has carved in stone. [Pols emphasis]

U.N. Secretary General António Guterres called the findings “a code red for humanity” and said societies must find ways to embrace the transformational changes necessary to limit warming as much as possible. “We owe this to the entire human family,” he said in a statement. “There is no time for delay and no room for excuses.”

Experts say that the Earth needs a coordinated international effort to combat Climate Change — one that can begin work IMMEDIATELY.

► As The New York Times reports, Congressional Democrats are close to proposing a $3.5 trillion budget blueprint:

Democrats on Monday launched their push for the most significant expansion of the nation’s social safety net since the Great Society, unveiling a $3.5 trillion budget blueprint that would boost spending on health care, child and elder care, education and climate change while bypassing a promised Republican filibuster.

The blueprint, which the Senate hopes to pass by the end of this week, would allow Senate Democrats to piece together social policy legislation this fall, fully paid for by raising taxes on the wealthy, large inheritances and corporations. And if Democrats and their two independent allies can hold together, that measure could pass the Senate without a Republican vote.

That measure would pass after a separate $1 trillion bipartisan infrastructure bill likely clears the Senate on Tuesday. Together, they would secure the remainder of President Biden’s $4 trillion economic agenda, but the two-step effort will test Mr. Biden’s ability to both work with Republicans and maneuver around them.

Colorado Newsline has more on the separate infrastructure proposal that could be close to making it through the Senate.

► Colorado Republicans are promoting their legislative priorities for 2022…in August of 2021.

This is a first for me. News conference at a gas station. The ⁦@cologop⁩ and the majority of the state’s GOP legislature is here to talk about their agenda for the next legislative session. They are the minority in both chambers. #coleg #copolitics pic.twitter.com/CcuG9LEuWN

There are no words.

In related news, The Colorado Sun notes that Republicans are prioritizing efforts to pass ballot measures because they have proven so inept at winning other elections recently.

► As Ernest Luning writes for The Colorado Springs Gazette, former state legislator and 2018 Lieutenant Governor candidate Lang Sias may be considering a bid for the Republican nomination for State Treasurer. If you’re not familiar with Sias, that’s probably because he’s not particularly familiar with winning elections.

► As The Grand Junction Daily Sentinel reports, Republican Marina Zimmerman says she is being pressured by allies of Rep. Lauren “Q*Bert” Boebert to drop her Primary challenge in 2022.

► Two Colorado attorneys who filed nonsense lawsuits alleging that the 2020 Presidential election was stolen from Donald Trump will have to pay legal fees for the defendants.

► Scott Miller, a wealthy LGBTQ activist and political donor in Denver, has been nominated by President Biden to serve as Ambassador to Switzerland and Liechtenstein.

► Colorado Newsline updates on the Coloradans who have been charged in the January 6th insurrection.

► The new “wild west of weed” is now in Oklahoma.

► As POLITICO reports, South Carolina Republican Senator Tim Scott is a hot name in the rumor mill for the 2024 GOP Presidential nomination.

► The Pentagon will require COVID-19 vaccinations for all troops by September 15.

Right, because there has been NO news coverage of this in the last three months. 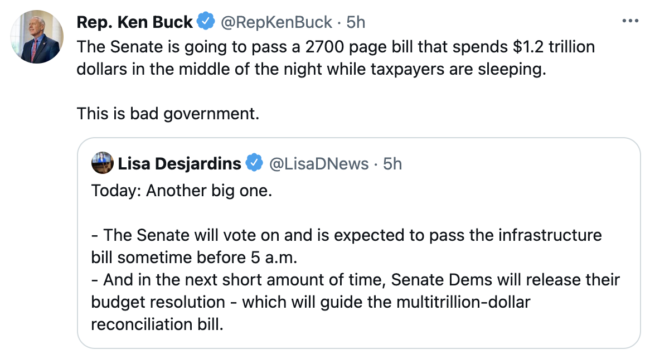 ► “I am the king of governors,” says Donald Trump:

► Glenn Grothman, who is apparently a Republican Member of Congress from Wisconsin, won’t say if he is vaccinated against COVID-19 because he doesn’t want to be seen as “taking sides.”