“Leave The Rest To Me” (And Lauren Boebert) 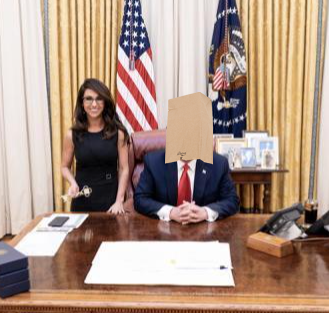 As the U.S. House special investigation into the assault on the U.S. Capitol by supporters of ex-President Donald Trump on January 6th continues, details continue to emerge showing how Donald Trump intended for his Republican allies in Congress to find a way–any way–to prevent the certification of Joe Biden’s victory that day, and leaning on officials at the Justice Department to provide him with even the thinnest rhetorical justification for continuing to resist Biden taking office. AP reporting:

“Just say the election was corrupt and leave the rest to me and the R. Congressmen,” [Pols emphasis] Trump said at one point to then-Acting Attorney General Jeffrey Rosen, according to notes taken by Richard Donoghue, who was then Rosen’s deputy and who was also on the call.

The notes of the Dec. 27 call, released Friday by the House Oversight Committee, underscore the lengths to which Trump went to try to overturn the results of the election and to elicit the support of senior government officials in that effort. Emails released last month show Trump and his allies in the last weeks of his presidency pressured the Justice Department to investigate unsubstantiated claims of widespread election fraud, forwarding them conspiracy theories and even a draft legal brief they hoped would be filed with the Supreme Court.

The pressure is all the more notable because just weeks earlier, Trump’s own attorney general William Barr, revealed that the Justice Department had found no evidence of widespread fraud that could have overturned the results. Unsubstantiated claims of fraud have been repeatedly rejected by judge after judge, including by Trump appointees, and by election officials across the country.

“Just say the election was corrupt and leave the rest to me and the R. Congressmen,” Trump said. In addition to incumbent Republican members of Congress like Jim Jordan, who is now under scrutiny for his conversations with Trump prior and/or during the January 6th insurrection, Trump was in at least some amount of contact with Rep.-elect Lauren Boebert. On December 27th, the day of this alleged conversation between Trump and acting AG Jeffrey Rosen, Trump was pushing January 6th on his Twitter feed and Boebert was amplifying:

Boebert had spent most of the previous day promoting what would become the insurrection: 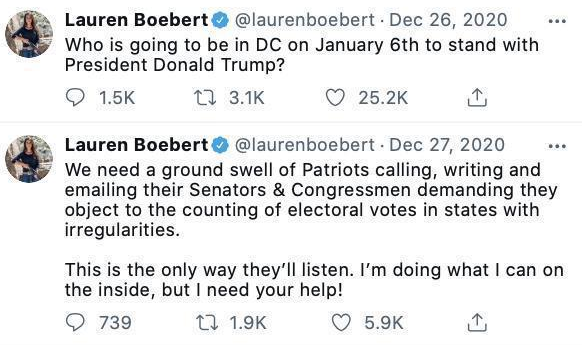 And on January 2nd, Boebert and Trump apparently spoke directly once again:

If the investigation does end up subpoenaing Republican members of Congress, the same questions posed to Jordan would apply to Boebert: what did you discuss with the President prior to January 6th about overturning the election? Did you talk to Trump on January 6th? Morning or afternoon? What was the plausible strategy for dead-ender Republicans to block certification of Biden’s victory by Congress that day, and what role if any were the insurrectionists themselves expected to play?

At the very least, Boebert’s clear role in mobilizing her supporters to show up on January 6th demonstrates the absurdity of including people like Jim Jordan and Lauren Boebert in this investigation in any capacity other than a suspect. This insurrection did not succeed, but unless we can be honest about who is responsible it may be impossible to prevent the next one.

There’s not much to misinterpret here. But there are hard questions Boebert has not answered.