Last night on CNN’s Anderson Cooper 360, reporter Gary Tuchman took an in-depth and extremely unflattering look at how freshman Rep. Lauren Boebert’s vitriolic dismissal of the threat posed by the COVID-19 pandemic is playing out on the ground in Boebert’s district as the Delta variant surges and hospitals struggle to cope.

The result is four minutes of video that would under any normal circumstances end Boebert’s career: 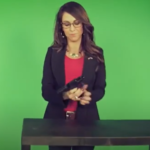 Tuchman starts with a recap of some of Boebert’s more incendiary Tweets on the pandemic, like calling CDC workers “Needle Nazis” and stating that the solution to the Delta variant is to “vote Republican and turn off CNN.” Tuchman tries and fails to get an explanation from Boebert as she’s entering the Capitol. Tuchman then turns his conversation with health workers at Memorial Regional Hospital in Craig, which was forced to reopen its COVID treatment unit due to the recent surge in cases. And that’s where things get very bad for Boebert:

TUCHMAN: How does it make you feel the way Representative Boebert has treated this pandemic, the masks, the vaccine?

TUCHMAN (on-camera): So you’re the CEO of an important hospital, her district, and you’re willing to go out on a limb and say that?

GRZEGOZEWSKI: She comes from a position of power being our elected official and I think that people are listening to what she’s saying. And a lot of what she’s putting out there is ideology that isn’t fact isn’t medically sound. And it’s putting a lot of people at danger. And it’s quite honestly costing people lives. And it’s frustrating to have to fight against that.

First of all, you have to admire the bravery of these health care workers. Their denunciation of Boebert’s deadly COVID misinformation in this segment is so compelling that it could raise the ire of her radicalized supporters. The willingness of these health workers to speak out in such clear terms against their own congressional representative tells us that Boebert’s popularity even in the heart of her district is tenuous at best–and much like we saw from Politico’s in-depth look at how Boebert plays in Pueblo in June, Boebert has a serious problem that the local media for whatever reason hasn’t yet acknowledged.

It’s time to acknowledge it. Boebert is doing quantifiable harm to the people of her district and the institution of Congress, and her longsuffering constituents are pleading for all of us to look past her diversionary clickbait bombast and see what is actually happening on the ground.

We owe them our gratitude and full attention.