He has always led with integrity, and I have great confidence in his ability to represent the United States.

We, in Colorado, are proud of him and grateful for his service once again. 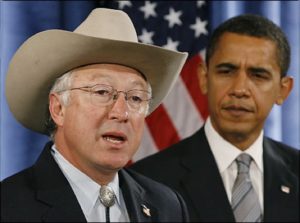 Just in from the Denver Post’s Justin Wingerter, though it’s been a prevalent rumor for some weeks now:

President Joe Biden has nominated Ken Salazar, a former U.S. senator from Colorado, to serve as the next ambassador to Mexico.

Salazar, 66, is the former secretary of the interior under President Barack Obama and had served as a Democrat in the U.S. Senate for four years before that. He is currently an attorney at WilmerHale and founder of the firm’s Denver office.

Salazar’s nomination will now go to the U.S. Senate, which must confirm him before he can take over the U.S. embassy in Mexico City.

Former Interior Secretary and U.S. Senator Ken Salazar’s expected nomination to serve as ambassador to Mexico was originally reported by Axios back in April, and we’ve been waiting since then to see it made official. Far from a patronage appointment, serving as ambassador to Mexico is one of America’s most challenging diplomatic posts, and we expect Salazar, a leading elder statesman to a whole generation of Colorado Democrats, will be very busy once confirmed.