Media Matters for America tips us off to a wild conservative political conference kicking off tomorrow in South Carolina, featuring some of the biggest names in conservative crazymaking today along with a few people who might someday regret the association:

Thomas Homan, a Fox News contributor and former U.S. Immigration and Customs Enforcement acting director, is scheduled to speak at a conference this week that will feature QAnon conspiracy theorists Michael Flynn and Lin Wood, who both have a history of endorsing political violence. South Carolina State Treasurer Curtis Loftis (R) is also set to speak at the event.

The United Patriots Alliance will host Rock the Red 2021 on June 4 and 5 at Embassy Suites by Hilton in Greeneville, South Carolina. General admission tickets are $167 and adult VIP tickets are $347. The conference describes itself as “the premier event in SC that educates, motivates, and activates citizens and patriots from around the country to get involved in the affairs of their local, state, and national governments.”

One of the keynote speakers is Flynn, a disgraced former Trump national security adviser and QAnon supporter. He recently spoke at a QAnon-themed conference and endorsed a Myanmar-like military coup in the United States… 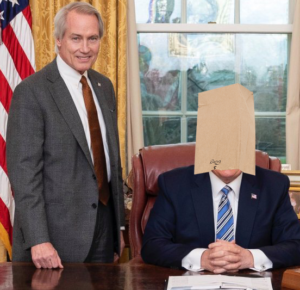 Michael Flynn and Lin Wood are by any estimate two of the most flamboyantly heinous figures in conservative politics today. Gen. Flynn’s open embrace of the “QAnon” conspiracy theory despite having held a position in government that without question gave him knowledge to know better is disgraceful on its own–but to share top billing with someone like Lin Wood, who called for the execution of Vice President Mike Pence, accused Chief Justice John Roberts of running a pedophilia ring, and claimed among a long list of other outrageous things that Jeffrey Epstein is not dead, is something else entirely.

And who else will be speaking at this weekend’s “Rock the Red” rally? A Colorado local who fits right in:

Former State Senator Ted [Harvey], at the age of 22, received a political appointment to serve in the White House of President Ronald Reagan. After returning home, Ted quickly became involved in Colorado politics and secured a staff position in the Colorado House of Representatives as the House Reading Clerk. After two years, Ted became the Program Director at the Independence Institute—a conservative/libertarian leaning think tank.

That’s right, folks–former state Sen. Ted Harvey of Highlands Ranch, who for years now has been associated with a series of what’s known as “ScamPACs” raising big money off small-change vitriol first against Hillary Clinton and then Democrats generally after Trump came to power, will be giving a major address Friday on the subject of “Cancelling the Cancel Culture.” Harvey’s oft-rebranded “ScamPAC” became infamous a few years ago after a Politico investigation found a number of related groups that seemed to exist to spend money on salaries and offices rather than on actual political program work.

But forget all that! A 45-minute speaking slot before some of the most gullible idiots in politics today, which has got to include anybody willing to spend money to hear from Lin Wood and Michael Flynn, should be a gold mine for Ted Harvey’s operation. At this point, these are some of the most reality-detached political donors to be found anywhere outside North Korea. If anything Harvey should call his PAC something other than “Committee to Defeat the President,” since these folks actually think Donald Trump is still the President.

A sucker is born every minute. Assembling so many in one room is priceless.

Say what you will about Ted Harvey, he knows how to get paid.