The House GOP Rebellion Isn’t About Any One Vote 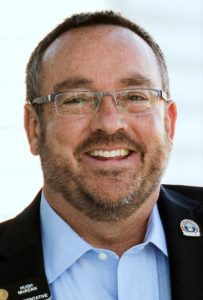 Colorado Public Radio’s Bente Birkeland follows up on a story we’ve been watching develop over the last week and a half, renewed infighting among the Colorado House Republican Minority after a mistaken vote by House Minority Leader Hugh McKean in favor of legislation to tighten background check requirements for gun sales.

McKean, as we discussed in this space ten days ago, immediately tried to take back his fat-fingered misvote, which wouldn’t have affected passage of the bill, but Democrats refused to allow it with Majority Leader Daneya Esgar shading McKean gloriously: “I understand and appreciate your situation, and will take this moment to remind us all that on third readings, we really should have our computers closed and our phones down and paying attention.”

Every bit as noteworthy is the pummeling McKean received after this mistaken vote from his putative allies at Rocky Mountain Gun Owners, who despite knowing the vote was a mistake tore into McKean in a message to their devoted supporters calling for McKean to immediately step down as Minority Leader.

And that’s where Birkeland picks up the story:

The political fallout for McKean was swift. The pro-Second Amendment group Rocky Mountain Gun Owners — which already opposed McKean’s leadership role — immediately put messages on social media about his quote “anti-gun” vote and asked him to step down.

“In my opinion, there’s two things that drove him to do this,” said the group’s head, Taylor Rhodes in a Facebook video. “Either A, it truly was a mistake and he’s incompetent or B, it was truly showing his true colors.”

Jim Pfaff, the former chief of staff for the Republican House Caucus who stepped down when McKean took over the leadership, called him a “gun-grabber” on Facebook, and said he sides with the radical left…

Not only has the vote caused McKean problems politically and within his fractured caucus, but he also said it hasn’t helped the already tense relationship between Republicans and Democrats in the House.

So if by this point you’re thinking to yourself that this is being milked for all it’s worth and then some, you’re not alone. By any objective measure the castigation of McKean over this immediately acknowledged mistake has absurdly exceeded the scope of the offense.

McKean took over as House Minority Leader last November after his predecessor Rep. Pat Neville declined to run again citing division in the caucus over his continued leadership. First in 2018 and recovering no ground in the 2020 elections, Neville led the GOP House Minority to historic defeat while managing to alienate just about everyone–from the press to many fellow Republicans–with self-immolating rhetorical grandstands and downright thuggishness.

Despite these failures, Neville retains considerable support on the hard right side of the House Minority, who remain as belligerent as ever and want nothing to do with Republicans proposing a change of course to win back independent voters who decide elections in this state. Incidents like Rep. Ron Hanks’ recent threat to break McKean’s neck for pulling the plug on parliamentary obstruction tactics signal the ongoing tension between the hard right faction of the caucus and McKean’s leadership. Neville personally joined in the opportunistic bashing of McKean over his mistaken vote on AM radio.

In the end, the vote McKean is reaping the proverbial whirlwind over is just a pretext. What this is really all about is internal frustration by Republicans over their severe losses in recent elections in Colorado. This deep dissatisfaction is very difficult for even new leadership to manage, especially when the old leadership doesn’t understand how they helped create the problem. At the same time, there’s really nothing McKean can do to energize Republicans after inheriting the smallest minority in decades.

And so the cycle of Colorado Republicans eating their own continues with no end in sight.