FRIDAY UPDATE: Politico reporting the expected, accountability for January 6th has been kicked down the road despite six Republican Senators who broke ranks and voted to get the facts:

The 54-35 vote, with six Republicans breaking ranks to join every Democrat in favor, came after Senate Minority Leader Mitch McConnell lobbied his members forcefully against the House-passed commission measure. The vote was delayed through the night by a handful of Senate Republicans who obstructed China competitiveness legislation, though Democrats decided to punt that bill until after the Memorial Day recess week in order to push forward on the commission bill…

The six Republican senators who voted to advance the commission proposal were Lisa Murkowski of Alaska, Susan Collins of Maine, Bill Cassidy of Louisiana, Ben Sasse of Nebraska, Mitt Romney of Utah and Rob Portman of Ohio. All but one of them also voted to convict former President Donald Trump in his second impeachment trial earlier this year. All six received public thanks from Rep. Liz Cheney (R-Wyo.), evicted from her party’s House leadership 16 days ago after vocal criticism of Trump and his role in the riot.

A seventh GOP senator who also voted to convict Trump this year, retiring Pat Toomey of Pennsylvania, would have supported advancing the House-passed commission bill had he not been called away from Washington for a family commitment, a spokesperson said.

Both Colorado Sens. Michael Bennet and John Hickenlooper were present and voted yes today, and spoke to NBC News’ Chuck Todd on the way to the airport about getting rid of the filibuster after today’s vote:

CNN reports after an appearance by Rep. Jason Crow of Colorado on Don Lemon Tonight last night, blasting Republicans for their attempts to obstruct a bipartisan commission to investigate the January 6th, 2021 insurrection at the U.S. Capitol that attempted to thwart the certification of President Joe Biden’s victory by Congress:

Rep. Jason Crow, a Colorado Democrat and veteran who helped comfort other lawmakers during the US Capitol insurrection, said Wednesday evening there’s a “domestic terror movement” in the US as he sought to highlight the risk of not investigating the January 6 riot.

“We have a domestic terror movement in America. It has been enabled, it has been furthered, it has been legitimized by leaders at the highest levels of our country, starting with Donald Trump,” Crow told CNN’s Don Lemon on “Don Lemon Tonight.” 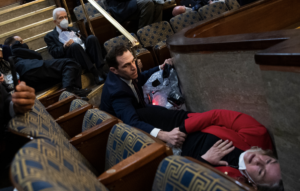 Rep. Jason Crow comforts a fellow House Member during the attack on the U.S. Capitol on January 6th.

Since the violence at the U.S. Capitol on January 6th, Rep. Crow has been at the forefront of lawmakers demanding accountability for what happened all the way to the top. Crow has compared the assault on the Capitol by supporters of now ex-President Donald Trump to his own experiences in combat as an Army Ranger in Afghanistan, and a photo of Crow trying to comfort a fellow representative as rioters stormed through the building has become one of the iconic images of this terrible day in American history.

The vote in the U.S. Senate on the January 6th commission bill passed by the House is by all accounts a foregone conclusion, with Republicans led by Minority Leader Mitch McConnell having locked down around a demand for false equivalence between the events of that day and unrelated recent protests such as the Black Lives Matter movement as their pretext to vote against. Despite the fact that McConnell, House Minority Leader Kevin McCarthy, and some other Republican leaders were in the immediate aftermath willing to assign blame for the January 6th insurrection where it belongs, with Trump personally, their courage in this regard has since evaporated. Which restores their complicity, assuming it was ever lost:

Mitch McConnell has reached out to certain Republican Senators and asked them to vote against the commission as “a personal favor” according to this. pic.twitter.com/arExPBz2be

No matter what Republicans said in shock following the attack on the Capitol, covering it up now is all that matters in terms of their legacy. Trump, who once boasted he could shoot a man in the street and not lose support, has proven himself correct beyond what even most of his critics could have anticipated. The normalization of what happened on January 6th by Republicans refusing to hold Trump accountable, perhaps more than any other factor, is setting the stage for the next round of political violence.

And that, readers, is why Rep. Crow is angry. You should be too.

At the end of the day, it may simply be too much to ask the guilty to convict themselves.