Get More Smarter on Friday (May 21) 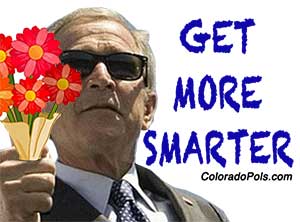 On this day in 2017, the Ringling Bros. and Barnum and Bailey Circus performed for the final time. Let’s Get More Smarter; if you think we missed something important, please include the link in the comments below (here’s a good example). If you are more of an audio learner, check out The Get More Smarter Podcast. And don’t forget to find us on Facebook and Twitter.

► Colorado is seeing a rise in the number of younger people hospitalized because of COVID-19, which is why officials such as Gov. Jared Polis are making a renewed push to promote vaccinations. Westword takes a closer look at Colorado’s vaccination numbers, particularly among younger residents.

Colorado Public Radio has more on the shift toward targeting a younger demographic.

In related news, the World Health Organization says that worldwide deaths from COVID-19 could actually be triple the current number. The W.H.O. estimates as many as 8 million people have now died from the coronavirus pandemic.

► Congressperson Lauren “Q*Bert” Boebert (R-ifle) is not like most people. You see, most people would not repeat something that is quite obviously false without pausing to consider the plausibility of their statement. This week, Boebert claimed in an interview on something called Real America’s Voice that Texas has not seen a single COVID-19 death since dropping mask restrictions two months ago. Thousands of people have died from COVID-19 in Texas in the last two months, which is something that would not surprise 99% of the people reading this sentence.

The Denver Post looks at some of the big bills that still have progress to make before the end of the legislative session.

The Associated Press reports on proposed legislation that would study the response of law enforcement officials during police protests.

Denver7 reports on the latest discussions over a big health care savings bill.

Democrats are pushing a bill that would require ballot measures seeking to raise or lower taxes to clearly explain the programs that would be effected by fiscal changes.

Colorado Newsline reports on the consistent progress of legislation seeking to give more rights to agricultural workers.

► There are a lot of problems with The Big Lie that Donald Trump was robbed in the 2020 Presidential election. One of those problems is starting to gain more attention in Arizona, as The Washington Post reports:

Arizona Secretary of State Katie Hobbs (D), the state’s chief elections officer, advised Maricopa County Thursday that it should replace all voting machines that were turned over to a private contractor for an audit of the 2020 presidential election, citing “grave concerns regarding the security and integrity” of the machines that make them unusable for future elections.

Hobbs’ guidance, outlined in a letter to county officials, is the latest fallout from a review of the election ordered by Republicans in the Arizona state Senate, who used a subpoena to order the county to turn over voting machines and nearly 2.1 million ballots to reexamine last fall’s vote.

The chief executive of the private company hired to conduct the audit has echoed false allegations that the election was stolen, and the process has been widely criticized by election experts as insecure and unprofessional.

Millions of dollars worth of Maricopa’s voting equipment used in the 2020 election — including nine tabulating machines used at a central counting facility and 385 precinct-based tabulators — were removed from a county facility and placed in the custody of Florida-based company Cyber Ninjas at the Arizona Veterans Memorial Coliseum for the review in late April.

It’s pretty amazing in retrospect to consider that Arizona lawmakers just handed over voting machines to a private company for inspection and never really considered whether or not that was a good idea from a security perspective.

► According to a press release from the office of Rep. Ed Perlmutter (D-Jefferson County):

Specifically, the legislation authorizes $1 million for the National Academies of Science, Engineering, and Medicine to examine the possible mental health effects of active shooter drills, lockdown drills, and other firearm violence prevention activities in schools on school staff and students, including younger children and children with disabilities.

In the 116th Congress, the same provision was approved by the House Appropriations Committee as part of the FY21 funding bill for the U.S Department of Education but it was ultimately excluded after negotiations with the Senate. The same request was made for inclusion in the FY22 funding package.

► The Aurora Sentinel looks at how Denver-area school districts are planning for a new school year in August.

► What’s that old saying about every joke containing a kernel of truth? That’s why it’s important to point out really gross comments made under the guise of “humor.”

► As POLITICO explains, the battle over the Senate filibuster is expected to ramp up again next week.

► Republicans in Colorado’s Congressional delegation may have no interest in writing laws that could actually get passed, but they are all onboard with rewriting history.

Oh, and there’s that HORRIBLE LAWSUIT filed against Lamborn by a former staffer accusing him of fostering an unsafe working environment, forcing staffers to run personal errands, and allowing his son to live in a storage room in the basement of the U.S. Capitol.

In a related story, Ernest Luning of the publication formerly known as the Colorado Statesman examines the “nine lives” of Doug Lamborn.

► Republican State Representative and former House Minority Leader Pat Neville may have no idea how to craft an acronym, but he is plenty skilled in taking shots at other Republicans.

► Coloradans can now legally possess up to 2 ounces of marijuana, which will lead to more sentence commutations from Gov. Jared Polis.

► Accusations are flying back and forth regarding problems distributing at-home COVID-19 tests in Colorado.

► The Colorado Rockies announced that fans no longer need to wear masks at Coors Field. The team is still working on how to protect fans from the horrible baseball being played in Denver.

► If you plan on traveling in the Denver area this weekend, don’t go anywhere near I-70.

► We’re going to guess that this guy will hear “Elvis is in the building” about 7,000 times in the next couple of months.

If your ultimate source of truth is fact-checkers, you need Jesus. https://t.co/sLCme1gP13

A House GOP candidate in Wyoming says he impregnated a 14 y/o when he was 18.

“She was a little younger than me, so it’s like the Romeo and Juliet story.”https://t.co/KZNKD5TzH7

► There can be no upside to being included in a story about someone’s brief history of racism.

► We’re not going to fault her for making the obvious joke here:

► The federal government is hiring!